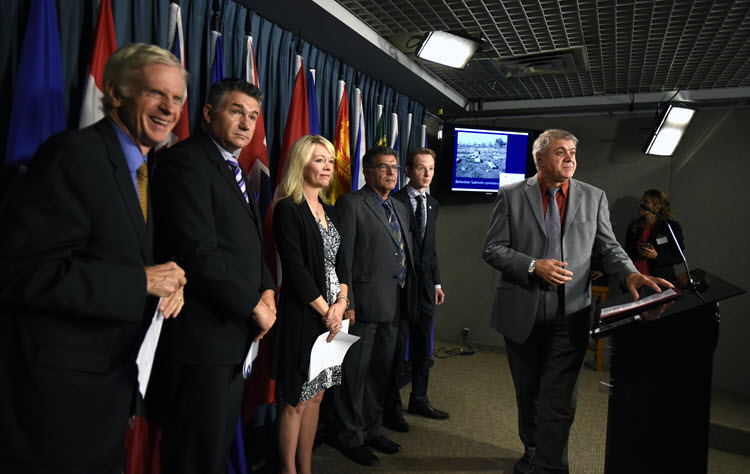 London, 8 October – On October 7, the National Council of Resistance of Iran (NCRI) published an article about the Canadian press conference of October 6, where Members of Parliament, representative of the Iranian-Canadian community, and eyewitnesses to the 1988 massacre urged the government of Canada to implement a motion adopted by parliament in 2013, condemning the massacre of political prisoners. It also expressed solidarity with political prisoners being held in Iranian jails today.

Since 2003, Canada sponsored an annual United Nations resolution denouncing Iran’s ongoing human rights violations. At the press conference, the Canadian government was urged to mention the 1988 massacre in this year’s resolution.

Speakers at the House of Commons called on the Canadian government to lead the way in demanding a UN commission of inquiry on this crime against humanity, and send a clear message that Iran faces consequences for its human rights abuses.

Based on a fatwa decreed by the Islamic Republic’s founder Ayatollah Khomeini, near the end of the long was with Iraq, some 30,000 political prisoners were massacred in the space of a few months in the summer of 1988.  They were secretly buried in mass graves. The target seemed to be those who were affiliated with the People’s Mojahedin Organization of Iran.

In August 2016 an audio file surfaced of Khomeini’s heir apparent, Ayatollah Hossein-Ali Montazeri. In the recording, dated August 15, 1988, Montazeri can be heard criticizing members of Tehran’s “Death Commission” who were appointed by Khomeini.

Spokesman for the Iran Democratic Association, Shahram Golestaneh, provided new details about dozens of officials involved in the massacre, as well as information about secret mass graves.  According to Golestaneh, “Scores of the officials who were responsible for this crime against humanity are at the helm of important Iranian institutions. According to the report of the UN Secretary General in September, nearly 1,000 executions were reported in Iran in 2015, the highest in the past two decades.  The very same individuals who carried the 1988 massacre are continuing their crimes with impunity.”

He added, “According to information compiled by the National Council of Resistance of Iran (NCRI) from sources inside Iran, most of the institutions of the Iranian regime are run by the perpetrators of the 1988 massacre.  In recent weeks, about 60 of the most senior officials responsible for this massacre, whose names had remained secret for nearly three decades have been identified. These individuals were members of the ‘Death Commissions’ in Tehran and 10 other Iranian provinces.”

Canada’s former Minister of State and Conservative MP, Candice Bergen, spoke about the human rights situation in Iran, particularly repression of women, as described in the recent report of the UN Secretary General. She dismissed the notion of the “moderation” of Iranian President Hassan Rouhani and claimed that the same officials who are responsible for modern-day repressive measures are implicated in the 1988 massacre. She joined her colleagues in asking the Canadian government to implement the 2013 motion and to ask for a UN investigation.

An influential voice in the Canadian Parliament on Iran human rights, James Bezan, to praise the 2013 motion adopted by parliament at the press conference. Bezan urged the Canadian government to implement the motion and ask the UN to conduct an inquiry into the crime.

David Kilgour, Chairman of Canadian Friends of a Democratic Iran, pointed out the “leading role that Canada can play in the human rights field. He cited the example of South Africa under Apartheid, when Canada led the way to change the status quo. As a former lawyer, he stated that impunity should come to an end and Canada should stand up for accountability and the rule of law in the case of this crime against humanity.”

A witness to the 1988 massacre, Mr. Ahmad Hassani gave an account of his brother, Mahmoud Hassani’s execution, as part of 30,000 political prisoners mass murdered. He said, “the regime has not provided any details about where his body was buried.”  Mr. Mehdi Garmroudi, who also lost a brother, gave his own eyewitness account.