We Cannot have Business as usual with Iran regime 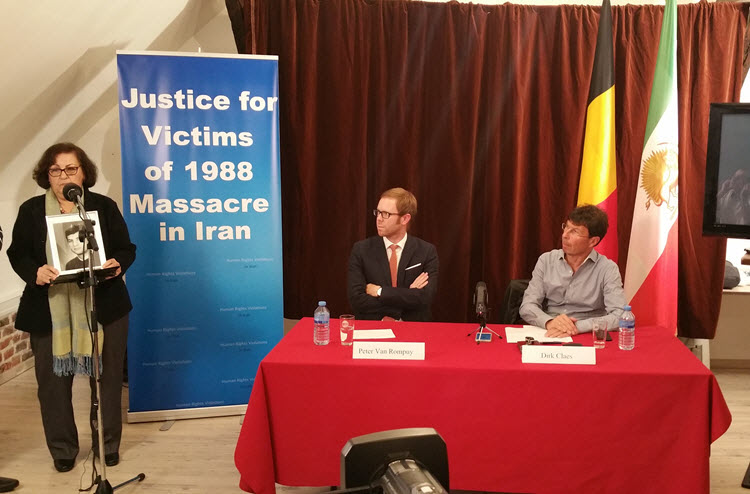 London, 24 October – A Belgian mayor presided over a meeting of the Belgian Committee of Parliamentarians and Mayors for a Democratic Iran, last Friday, where he called for an investigation into Iran’s human Rights Record.

Dirk Claes, Mayor of Rotselaar, who has been heavily involved in the struggle for a free Iran for a long time, called the meeting to discuss the 1988 Iranian Massacre, which killed over 30,000 political prisoners.

He said: “Many of them were serving their prison sentences and were supposed to be released soon. They were buried in mass graves and so their families did not know where to grief for their loved ones.”

He also discussed the implication of the leaked audio file which proved the existence of death committees within Iran. On the tape Ayatollah Montazeri, then heir to the supreme leader, can be heard accusing the regime of “the greatest crime in the history of the Islamic Republic”.

Claes said: “It is interesting to note that one of those members of that Death Committee is the current Minister of Justice in the government of President Rouhani who pretends to be a moderate! This person has said that he is proud to have carried out the executions.”

He points out that the massacre has not stopped; 1,000 people were killed in 2015 alone by the Iranian Regime; which gives the country the dishonor of having the highest per capita execution rate in the world.

Claes, who has been working with the Iranian Resistance for 14 years, said: “They have suffered very much under the mullahs. They also had over 3000 of their members in the neighbouring Iraq in camps Ashraf and Liberty which were frequently attacked by agents of Iran… I am glad that recently these Iranian refugees in Iraq have been transferred to safety, most of them are now in Albania and some other European countries.”

He helped to organise meetings regarding the human rights situation whilst he served in the Belgian Parliament and Senate and gathered petition signatories regarding the safety of Resistance Forces in exile in Iraq.

Claes said: “We call for the 1988 massacre to be on the agenda of the Human Rights Council. The UN High Commissioner for Human Rights must issue a call for an investigation in this regard. We urge the European governments, including the Belgian government to condition their relationship with Iran to a suspension and halt of executions.”

He continued: “We cannot have business as usual with this regime. The issue of human rights cannot be compromised for trade and big economic contracts. We have to defend the European values of democracy, women’s rights, rights for ethnic and religious minorities and freedom.”