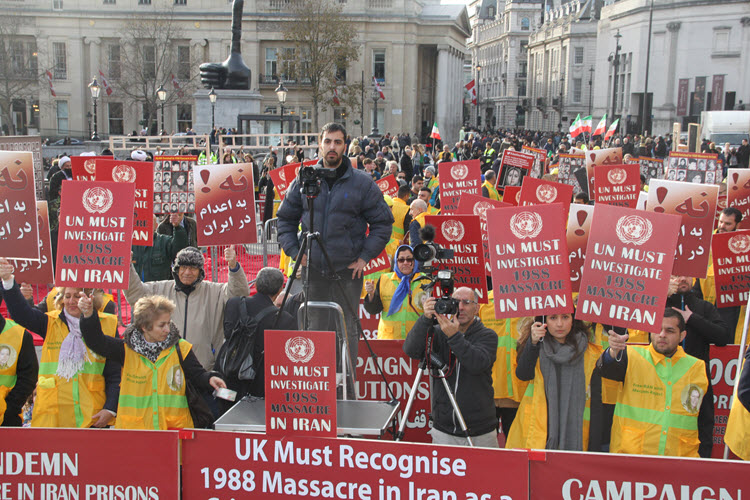 London, 19 Nov – In his article for Metro, Toby Meyjes writes about the 1988 Massacre in Iran, and the effects it’s had on the families of the victims.

Five of Omid Ebrahmi’s family members were executed by the Iranian regime, so he knows how important justice for the thousands killed in Iran in 1988 would be for family members.

Omid and his panicked family watched as the Revolutionary Guard took his 16 year old uncle, Hossein, from his home. Overwhelmed by grief, Omid’s mother was unable to talk for a month.

Seven years later they finally learned his fate; he’d been killed by the regime. By that time, three more of Omid’s relatives had been executed.

Unfortunately, this family’s loss was common during that time period. The Summer of 1988 saw thousands die. Estimates range wildly, from 7,000 to 30,000.

Omid Ebrahimi lost two aunts, Farangiz and Soheila; his uncle and great uncle, Aziz, were executed in 1981, while his other great uncle, Houshang, died in 1993. As well, his father, Ahmad, was a political prisoner for ten years between 1981 and 1991 and counts himself lucky to be alive.

19 year old Omid now lives with his family in London. He was too young to have personally seen relatives executed, however, like many others, he is eager to see the executions of 1988 condemned as a massacre.

Amid accusations of self-interest over trade deals, the British Government has not done this, as yet.

On November 19, Omid participated in a London demonstration, seeking that recognition and condemning the escalation of executions taking place in Iran today. He told metro.co.uk that condemnation from the government, “would mean the Iranian regime has to watch itself, it can’t go around violating various conventions on human rights. This would be a major step towards major regime change in Iran and that’s the only way we can stem the flow of executions in Iran.”

At least 977 people were executed in Iran last year, according to Amnesty International estimates. Their reports also suggest that scores of juveniles are on death row in the country.

Diplomatic and trade relations have improved between Iran and Britain this year, after economic sanctions were lifted following the implementation of the P5+1 nuclear deal. This, despite these human rights concerns, and more surprisingly, despite the imprisonment of dual nationality Britons, such as Nazanin Zaghari-Ratcliffe and Kamal Foroughi.

In August, the Iranian embassy reopened in London, and in September, British Airways announced it was resuming flights to Tehran.

Matthew Offord MP, whose constituents include many people of Iranian heritage is speaking at the rally. He has previously said that he feels the resumption of diplomatic relations was a missed opportunity. “I was a critic of the nuclear deal that was agreed with Iran,” he said. “I think the British Government should put human rights ahead of potential profits because we have a moral imperative to take the lead on it.”

He continued, “I think it was huge missed opportunity that we decoupled human rights from the nuclear deal. I think there is concerted action to rebuild that diplomatic relationship between the two countries, [but] I’m concerned that human rights have been quietly side lined or conveniently overlooked.”

Malcolm Fowler, Human rights lawyer, who sits on an independent committee examining the issue, stated that there is enough information for the government to condemn Iran’s actions in 1988 as a massacre. “There is a resistance because it doesn’t suit the trading and diplomatic mind set of the Foreign and Commonwealth Office,” he said. “It never has and that is despite much resistance putting forward this evidence.”

An audio tape released earlier this year of Ayatollah Montazeri’s meeting with Iranian officials, including Hossein-Ali Nayeri, Morteza Eshraghi, Ebrahim Raeisi and Mostafa Pour-Mohammadi, all still active as officials in the regime today. Montazeri, former Deputy Supreme Leader and Khomeini’s nominated successor, can be heard describing the mass execution of political prisoners as “the greatest crime committed during the reign of the Islamic Republic” and tells them that they would be remembered in the future as criminals. This alleged discussion of the killings amongst Iranian officials in 1988, has renewed calls for justice.

Following the outrage provoked by the audio tape, the Committee for Justice for Victims of 1988 Massacre in Iran (JVMI) was established to examine and re-examine evidence. “It provides proof positive of what we’ve been saying for a very long time. We need to assemble this evidence, there is an enormous amount of this.”

“The British government opposes the use of the death penalty in all circumstances and takes any allegations of extrajudicial killings seriously,” according to a Foreign Office spokesman.

New York Times: The outside world may be focused...