Maryam Rajavi: Urged Europe Not to Expand Their Diplomatic or Economic Relationship With Iran 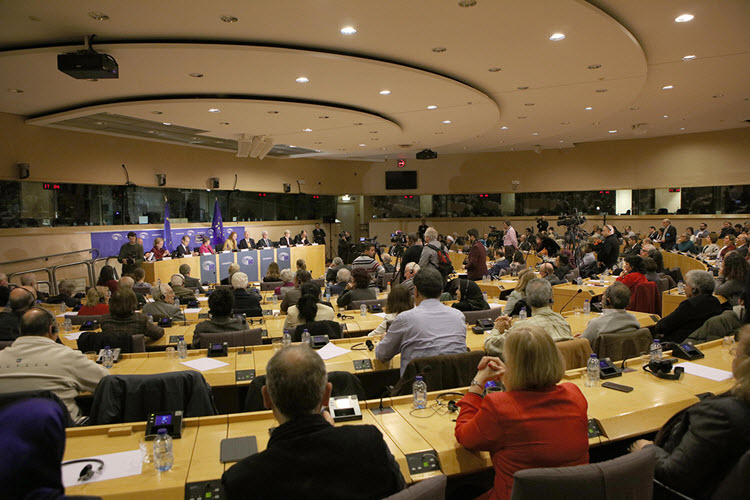 London, 9 Dec – The European Parliament has invited international human rights advocates to meet regarding the situation of human rights in Iran.

The event, which took place in the same week as International Human Rights Day, featured the president-elect of the National Council of Resistance of Iran (NCRI), Maryam Rajavi, as its keynote speaker.

Rajavi said: “For my country, Iran, Human Rights Day is a reminder of the deep scar on my nation’s body and soul, with 120,000 executed dissidents and hundreds of thousands of tortured political prisoners, with at least 5000 prisoners who are presently on the death row and human rights activists and followers of different faiths in prison.”

She urged European countries not to expand their diplomatic or economic relationship with Iran unless there is a huge improvement in the human rights situation.

Anna Fotyga, President of European Parliament’s subcommittee on Security and Defence, shared her experiences under communist rule in Poland and drew parallels with the current situation in Iran.

She said: “I have my own experience of combating a regime that was vicious, and I know how difficult it is.”

Shabnam Madadzadeh, a former political prisoner in Iran, reminded the meeting’s attendees of the 1988 massacre which killed 30,000 political prisoners and compared it to the current warfare in Syria.
She said: “The war crimes being committed in Syria and the situation of men, women, and children in Aleppo is an inevitable shame in modern history. It is time to put an end to our silence.”
José Bové, a Green MEP from France, agreed with Madadzadeh.

He said: “The government of Iran has a heavy responsibility for what is happening in Syria. The Syrian government would not have sustained itself without the support of Iran. The role of Hezbollah is well-known; today, Iran is one of the greatest generators of trouble in the Middle East.”

He then addressed the Iranians at the event and told them that they were welcome in Europe and in this parliament.

Guilio Terzi, advisory Board of United Against Nuclear Iran and Italian Foreign Affairs Minister, criticised the Italian government for the deals that they had agreed to with Iran.

He continued: “According to [the false narrative spread by Iran], Rouhani is no longer a threat…and this has emboldened the Iranian regime.”

US voices concern about Iran envoy

AFP: The United States said Thursday it has voiced concern...

Fox News: The "Mini-Me drone" Iran says it reverse-engineered from...