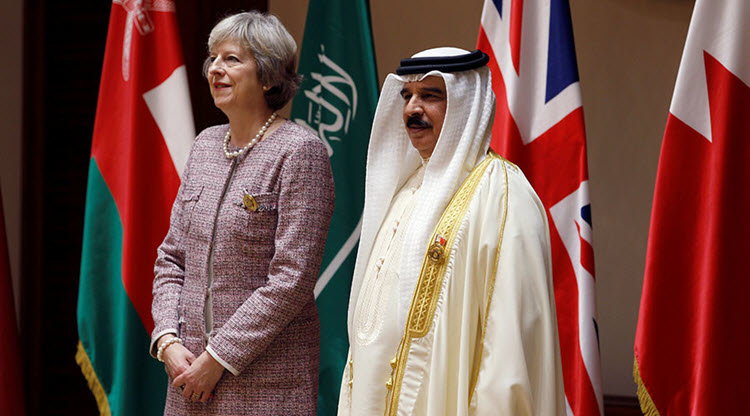 London, 9 Dec – The British Prime Minister Theresa May and leaders from six Arab countries have agreed to work together to counter the “destabilizing activities” of Iran.

This pledge is designed to calm nerves following last year’s nuclear deal with Iran and six world powers, including Britain.

May met with the Gulf Cooperation Council (GCC), a regional bloc of Western-allied countries including Kuwait, Oman, Qatar, Saudi Arabia and the United Arab Emirates.

The GCC have become increasingly concerned with Iran’s support of the Syrian President Bashar Assad or their backing of the Shiite rebels in Yemen.

At the end of the two-day summit in Bahrain, the GCC and May released a statement which called for a political settlement to transition away from the Assad regime in Syria.

It read: “There is no military solution to the region’s armed civil conflicts.”

May said: “[All parties must] work together to push back against Iran’s aggressive regional actions, whether in Lebanon, Iraq, Yemen, Syria or in the Gulf itself.”

She continued: “Gulf security is our security. Extremists plotting terror attacks here, in this region, are not only targeting the Gulf but, as we have seen, targeting the streets of Europe, too. Whether we’re confronting the terrorism of al-Qaeda or the murderous barbarity of [so-called Islamic State], no country is a more committed partner for you in this fight than the UK.”

Iran’s Foreign Ministry spokesman Bahram Ghasemi[ said: “[The U.K. is] not in a position to accuse others of interfering in regional affairs.”

He accused the UK of trying to sign news arms deals with the GCC countries.

May recommended ongoing vigilance towards Iran especially their ongoing warfare in Syria, destabilising Lebanon and Iraq and providing support for the Houthi rebel movement in Yemen.

AFP: The United States said Friday it will host...

Reuters: The weak U.S. dollar is the main reason...