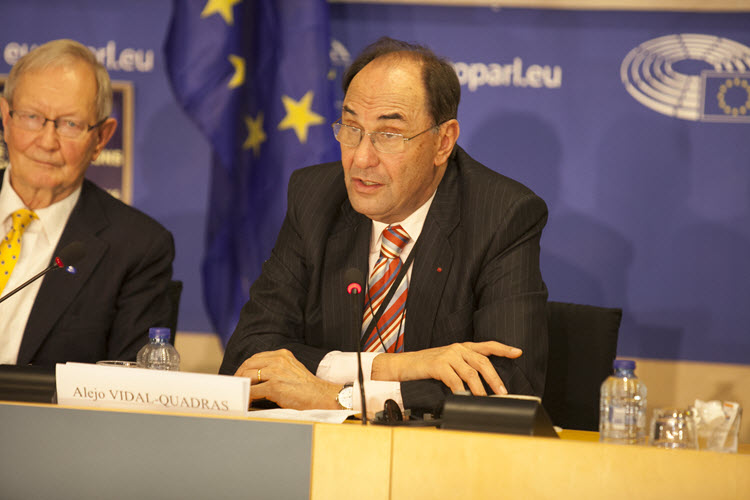 London, 13 Dec – The European Union’s policy towards the Iranian Regime has weakened considerably, since the current High Representative, took office two years ago, according to a former vice president of European Parliament

Alejo Vidal-Quadras, who is also President of International Committee in Search of Justice (ISJ), stated that Federica Mogherini’s treatment of officials from Tehran has been far too accommodating for a government that effectively laughs in the face of human rights.

He said: “I’m sorry to say that her unnecessary friendly and submissive attitude in her conversations with people directly involved in thousands of executions, systematic torture and all kinds of abuses against human rights and civil liberties, people that in fact should be taken to court for crimes against humanity, is a moral discredit for herself, and for the European Union in its role as promoter and defender of the values of the open society in the world.”

He made these comments at a conference, organised by the Friends of a Free Iran intergroup, in the European Parliament on Wednesday 7 December.
The meeting concluded that the Iranian Regime must be strongly condemned for human rights violations of in Iran and that Mogherini and EU member states must be urged to condition the expansion of relationships with Iran to a halt of executions.

Larijani reportedly wrote to Mogherini, asking the EU to break off contact with the democratic opposition, including the National Council of Resistance of Iran (NCRI).

Vidal-Quadras said: “The same man that strongly defends the massive use of death penalty against political opponents and human rights activists, is the one that criticizes a democratic and peaceful event in favour of regime change in Iran. “

The opposition forces have been instrumental to the west, providing information on the Regime’s nuclear and terror-related activities.

Vidal-Quadras continued: “[Iran’s] systemic violation of human rights cannot be considered an internal matter of any country. These practices of the Iranian regime have penetrated neighbouring countries beyond Iran’s borders. This is a regime that is extending the crimes that have been committed in its own country in the past 30 years, to other territories, such as Iraq and Syria…. The regime’s brutal behaviour, mainly the massacre of the summer of 1988, and many more atrocities, have never been brought to justice. The export of terrorism and fundamentalism, meddling in internal affairs with other countries in the region, the implementation of the same policies of oppression and suppression that exist inside Iran to the whole of the Middle East.”

He noted that the solution to the mullahs was for the West to throw their support behind the democratic resistance forces, including the NCRI and its president-elect, Maryam Rajavi.

They have a ten-point plan to transform Iran into a democracy; the plan features human rights, disbanding the nuclear weapons programme and removing their armed forces from other Gulf Regions.

U.S. detains 13 terrorists in Iraq for bringing weapons from Iran

Hamas leader to travel to Iran in coming days  report