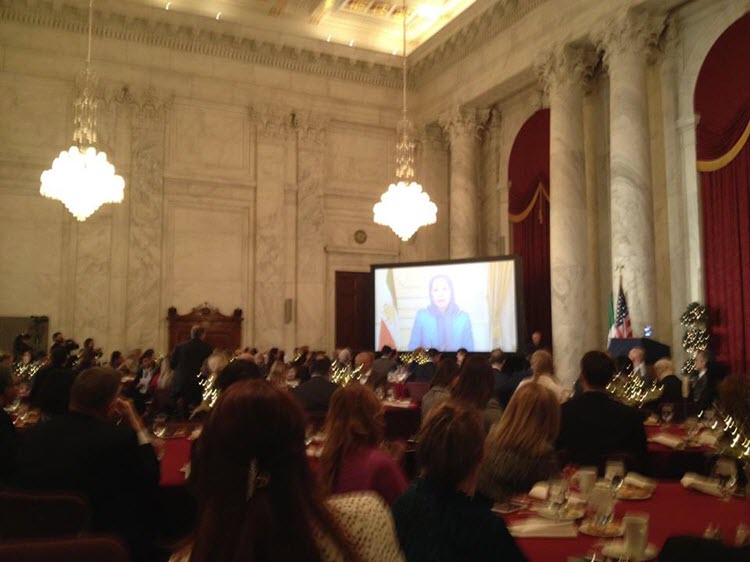 London, 13 Dec – We will only be able to defeat ISIS if we confront the Iranian Regime, warns Iranian opposition leader.

Maryam Rajavi, the president-elect of the National Council of Resistance of Iran, made these comments via a video message in a US Senate Briefing.

She said: “There is no doubt that fighting fundamentalism and extremism under the banner of Islam either Shiite or Sunni, can only be made possible through confronting the Iranian regime which is the godfather of fundamentalism and terrorism. In other words, fighting against ISIS cannot be separated from confronting this regime. When the clerical regime is pushed back in the region the world will get that much closer to destroying ISIS.”

The briefing on US policy toward Iran, held at the Senate Kennedy Caucus Room, was attended by senior senators and former national security officials. It was sponsored by the Organization of Iranian-American Communities (OIAC).

Rajavi notes that the 2015 Iranian nuclear deal has grossly failed to either improve the standards of living of the average Iranian or remove the threat of a nuclear Iran.

She said: “Despite a decline in sanctions and transferring a considerable amount of cash to the mullahs’ pocket, the Iranian economy is suffering from recession. Bureaucratic and government corruption, and astronomical stealing by regime officials appear to be endless. The Iranian economy is under the control of the regime’s supreme leader Ali Khamenei and the Islamic Revolutionary Guard Corps. They are the only one who will benefit from trade with Iran and not the Iranian people.”

She also notes that the regime has continued to test their nuclear weapons in violation of a UN Security Council resolution.

During the meeting, the lawmakers condemned the Iranian Regime for its interference in Middle Eastern countries and for human rights violations in their own country.

Rajavi noted that nearly 3,000 people have been killed in the “moderate” presidency of Hassan Rouhani; the highest number in 25 years, according to the United Nations.

She said: “In order to create an atmosphere of repression and fear in society, the clerical regime has been executing a large number of victims, in public places.”

The regime has also been funding the Syrian dictator’s war against his own people; if not for the Iranian mullahs, Bashar al-Assad may well have been defeated by the Syrian resistance forces by now.

Rajavi said: “The Iranian people, with more than a century-long struggle for democracy and liberty, deserve a government that respects their fundamental rights. These rights include the freedom of expression, free elections, gender equality and equal rights for religious and ethnic minorities. Such a country would be the herald of peace and tranquillity in the Middle East.”

According to human rights activists, Iranian authorities have launched...