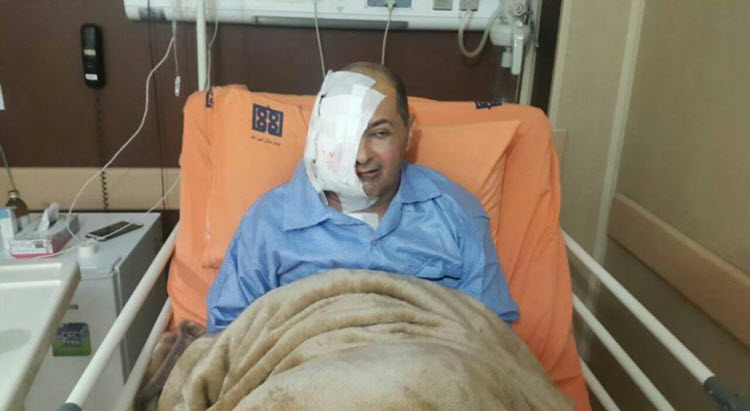 London, 8 Sep – An organisation dedicated to freedom of the press and fighting for the rights of journalists all over the world have condemned the Iranian Regime’s treatment of a journalist and political prisoner, which caused him to lose half of his face.

The International Federation of Journalists (IFJ) released a statement about Alireza Rajaee, a board member of the Association of Iranian Journalists, who has recently undergone a long delayed treatment for cancer, which cost him his right eye and part of his face.

The IFJ said that they hold the Iranian judicial system responsible for the medical complications caused by the lack of treatment.

Whilst in prison on bogus charges of acting against national security” and “propaganda against the state” from 2011-2015, Rajaee was denied adequate medical care or to be seen at the local hospital, according to his wife Leila Liaghat.

Instead, his former cellmate Hossein Ronaghi Maleki told the Center for Human Rights in Iran, the prison doctor treated him for a toothache and gave him painkillers.

Upon his release from prison, Rajaee had an MRI scan and was diagnosed with sinus cancer. He underwent six rounds of chemotherapy, four laser eye therapy sessions and radiotherapy but CT and MRI scans in December 2016 revealed that the cancer had spread to his jaw, right eye and roof of his mouth.

There was no option but to remove the cancerous tissue before it could spread further, so on September 3, underwent a 14-hour surgery to remove his eye and part of his face.

The IFJ also demanded that the Iranian government take responsibility for the proper treatment of journalists’ current imprisoned in Iran, including Ehsan Mazandarani, the former director of Farhikhtegan newspaper who has been in prison for over 13 months.

As a result of beatings from the Regime guards, Mazandarani is unable to ingest solid food and has been receiving food via serum for nearly two weeks.

His mother revealed that he has not been treated at Taleghani hospital in Tehran, despite having been transferred there eight times in recent weeks.

Bellanger continued: “[We demand that the Iranian judiciary also] ensure that other journalists including our colleague Ehsan Mazandarani are provided with proper medical care. This level of negligence from the authorities, intentional or otherwise, is completely unacceptable, and constitutes a grave violation of human rights.”