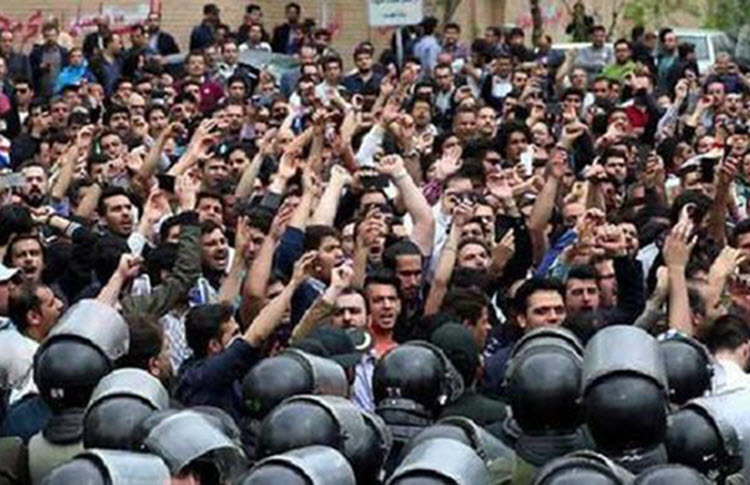 London, 7 Nov – Iran has convicted at least 24 protesters on vague national security charges, with prison sentences ranging from six months to six years, according to Human Rights Watch. They were charged with “assembly and collusion against national security” and “disrupting public order”, according to three sources with knowledge of the matter.

The convicted people were denied access to a lawyer – even those on the small list of state-approved lawyers for national security cases – and pressured to plead guilty. Two protesters were convicted based on their social media posts about the protests alone.

They were among over 50 people arrested during a protest over deteriorating economic conditions and corruption in Tehran on August 2. The Government also sentenced 10 other protesters who took part in the December uprising to prison for one to three years each.

The Iranian Government sentenced human rights lawyer Mohammad Najafi to three years in prison and 74 lashes for reporting that his client, Vahid Heidari, had died in custody, under suspicious circumstances, with evidence of torture on his body.

The charges were dressed up as “disturbing the state” and “publishing falsehoods” and were upheld on appeal, according to Najafi in a Facebook post on October 18.

Michael Page, deputy Middle East director at Human Rights Watch, said: “Iranian government officials repeatedly advertise to the world that the repeated protests in the country signal that there are real freedoms in Iran, while these same protestors languish in prison for years. Prosecuting peaceful protesters will only add fuel to Iranians’ boiling frustration and discontent with the situation.”

This mistreatment is a clear violation of the International Covenant on Civil and Political Rights (ICCPR), to which Iran is a party. The ICCPR bans torture and cruel, inhuman, or degrading treatment, prevents confessions extracted under torture from being admissible, and guarantees the right to a fair criminal trial, which includes access to a lawyer of your choosing, the ability to prepare a defence, and the ability to examine the prosecution’s witnesses.

Page said: “Countries that engage with Iran should press authorities for independent investigations into the proliferating number of abuses committed by Iran’s repressive intelligence and security apparatus.”

While nine female activists have been summoned to Evin Prison in Tehran for questioning, according to lawyer Amir Raisian, before being interrogated and charged. The warrant failed to note the charges and brought the women in under false pretences, but one activist warned that more people would be arrested soon.

Huda Ameen, who was charged with “attempting to dismantle family structures” for setting up training workshops on “conditions of marriage contracts” and “equality in domestic work”, was released on bail, but other women’s rights activists, Najma Wahidi, Mariam Azad and Radwanah Mohammadi, were still being held.