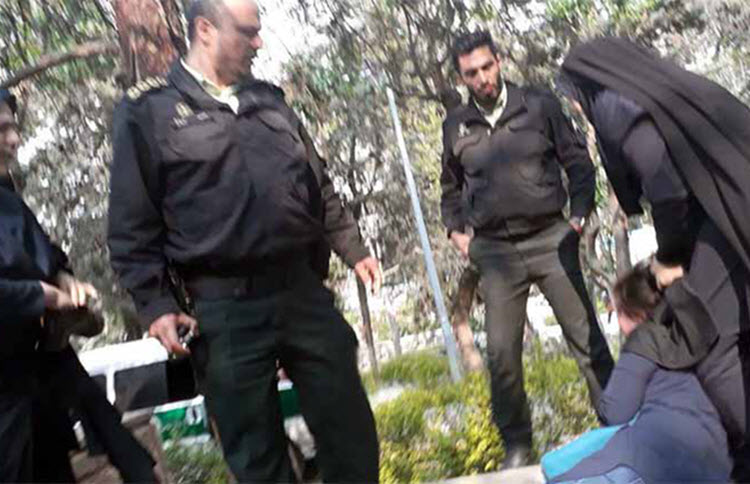 London, 7 Nov – Two young woman filed a complaint against Iran’s Morality Police for beating them, because their head covering was deemed ‘insufficient’.

State-run IRNA news agency reported that their attorney, Mohammad Hossein Aghasi, said,“The 9th Branch of the Prosecutor’s Office of the Armed Forces Judiciary Committee overturned the case, arguing that there was not sufficient evidence.”

Aghasi tweeted on November 2nd, that the Armed Forces Judiciary Committee rejected the complaints of the students.

A video of the women with two female guidance patrol officers went viral on social media. It shows a woman being violently attacked for her “insufficient” head covering by the country’s so-called morality police. Members of the special task force are shown tackling the two women and wrestling one of them to floor because her hijab was loose. The other is slapped ing the face by a female police officer and wrestled to the floor. The young woman is heard screaming, “Let me go, let me go.”

“We had filed a complaint that a female officer had dealt blows and insulted (the students) and requested that the Taleghani Park guard who was witness to the incident be present in the court as a witness but the prosecutor did not ask the guard to be present,” their lawyer said. “He only listened to the testimonies of three other girls who were with my clients at the time and said that the testimonies were not the same,” he continued.

One of the young women suffers from a heart condition —she lost consciousness during the beatings. In the video, another woman is seen attempting to comfort the victim.

The officer can be heard on the video telling the victims, “You can’t do a damn thing.”

After the video went viral, Iran’s Minister of Interior, Abdolreza Rahmani-Fazil, ordered an inquiry, calling the incident “an unusual treatment of a woman at the hands of the morality police.”

The Presidential deputy on Women and Family Affairs, Massoumeh Ebtekar, denounced the treatment of the young woman on Twitter. “How could this treatment be justified?” she tweeted. “Even if they were insulted, should the police react like this? I categorically condemn this behaviour and will pursue the matter. This is a harsh and anti-religious treatment that no human deserves.”

However, Alam ol-Hoda, Khamenei’s representative in Mashhad, denounced those who had defended the women saying, “A wrongdoing by an officer or agent should not undermine the essence of this religious vice.”

Sadegh Amoli Larijani, head of the Judiciary Branch, stressed in a speech, the need for the State Security forces to act within the frameworks of religion and law. He said, according to the state-run ISNA news agency, “No one should be allowed to resist against law enforcement by the State Security Force or insult its officers. The SSF will not take even one step back.”

Kayhan daily praised the policewoman. “It is very logical that the policewoman involved in the incident be praised and encouraged by the Interior Minister and the SSF Commander.”

Tehran’s Chief of Police, Hossein Rahimi, was quoted by the state-run Fars news agency as denying reports that the officer had been suspended. He declared, “We powerfully defend our agents.”

As well, the committee held a meeting with SSF commanders and the Commander of the State Security Force, Hossein Ashtari, announced that the officer involved had been granted a plaque and honored at the SSF command headquarters only two days after the incident.

Fars news agency reported that the victims had deliberately incited the attack, citing the fact that they had a camera, and claimed that the incident had been planned for taking political advantage.

Bloomberg: Israel is again turning up the pressure on...