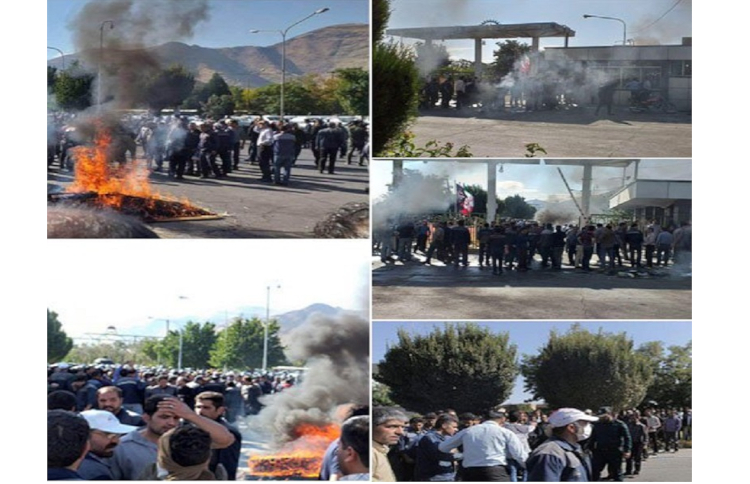 On Sunday 6th October, reports from Iran indicate that the town of Lordegan in the southern province of Chaharmahal and Bakhtiary Province was subjected to a brutal crackdown and unofficial martial law. The entry and exit points to the town were blocked by officials and battle tanks and agents were patrolling the town.

Protests in Lordegan took place the previous day because of the crisis in which around 300 people from the village of Chenar Mahmoudi were infected with the HIV virus because of the government’s negligence. Locals were peacefully protesting outside the Health Department offices which resulted in the authorities sending security forces to disperse the crowd. The security forces opened fire.

The protesters then set the Lordegan Governor’s Office and the office of the representative of the Supreme Leader Ali Khamenei alight, furious that security agents were attacking them.

The crisis was sparked because employees of the health ministry used dirty syringes to take blood samples from locals. Hundreds of people have now been infected with the HIV virus and the people are quite understandably scared and angry. Scared about what the future holds for their health and angry that such negligence has had such life-changing consequences.

Mrs. Maryam Rajavi, President-elect of the National Council of Resistance of Iran (NCRI), praised all those that demonstrated against the “regime” and in support of the people of Chenar Mahmoudi village.

Mrs. Rajavi applauded the people that stood up to the regime and its agents that are trying to silence them. The crowds were chanting that they are not afraid of the regime because together they are an almighty force. They were also heard shouting for the resignation of incompetent officials and they chanted “down with the dictator”.

The women of Iran have played a major role in the protests regarding this current health crisis, with a high proportion of the protesters being women.

With regards to the movement of Iranians supporting the people of Chenar Mahmoudi, Mrs. Rajavi said: “With their chants of death to the dictator and attacking the office of the representative of the Iranian regime’s Supreme Leader Ali Khamenei, they targeted the clerical establishment as the main cause of all the atrocities perpetrated against the Iranian people.”

The leader of the opposition said that the “corrupt and criminal regime” has plundered the country’s wealth for causes like its ballistic missile and nuclear programs and of the spread of chaos and terrorism across the region and beyond.

How to handle Iran likely a big shadow issue in Nov.

Arizona Republic: After Tuesday's primaries, both Barack Obama and...