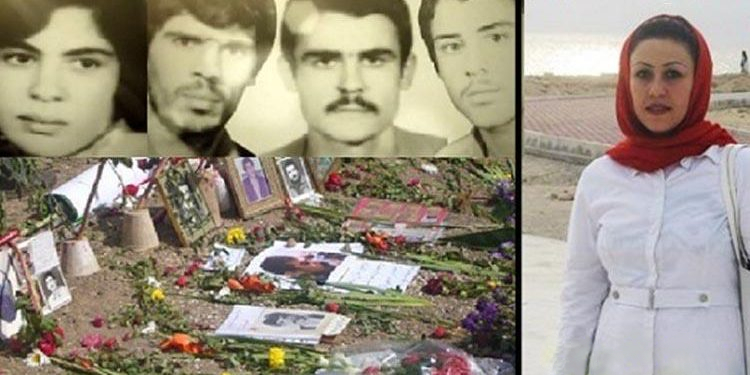 This sentence came following her compliant about the dire conditions of a new prisoner in the female ward of Evin Prison. Prison guards issued this punishment without official procedures like holding a disciplinary committee meeting.

On October 2, 2018, Mrs. Akbari, along with Golrokh Iriaei and Atena Daemi was also banned from family visits for three weeks. Over the past ten years, she was dispossessed of any vacation. As a result of inhuman pressure on this political prisoner, she contracted rheumatoid arthritis and suffers from severe pains and cannot sleep at night. However, Evin prison guards have denied her access to medical care in out-of-prison hospitals and medical facilities.

Security forces detained Mrs. Maryam Akbari Monfared in late December 2009 after anti-establishment protests erupted in the Iranian capital Tehran and several large cities. On June 1, 2010, the “revolutionary court” headed by Abolqassem Salavati sentenced her to 15 years in prison. She was charged with Moharebeh by joining the People’s Mojahedin Organization (PMOI/MEK) of Iran, the pillar of the Iranian Resistance. Notably, the Iranian government had executed four members of Akbari Monfared’s family in the summer of 1988 during the most horrific crime of the ayatollahs. At the time, prison guards massacred more than 30,000 political prisoners, mostly PMOI/MEK members and supporters, under a fatwa that was issued by the religious fascism’s founder Ruhollah Khomeini. The current head of the Judiciary system Ebrahim Raisi was a member of the “death committee” that authorized the mass killing.

Mostafa Pour Mohammadi, the former minister of justice in the first term of Hassan Rouhani’s administration, was another member of the “death committee.” In November 2019, he rudely threatened PMOI/MEK members and supporters with more executions. “We didn’t finish our [job],” Pour Mohammadi said in an interview while he was defending the 1988 massacre.

It is worth reminding that Mrs. Akbari Monfared was one of the signatories of an open letter that called on the Iranian people to boycott the formality election on February 21. She along with eleven female political prisoners who are held in Evin Prison wrote in their letter, “On the same day that the Assembly of Experts was formed for the protection of the totalitarian religious dictatorship (Velayat-e-Faghih) instead of the Constituent Assembly with the free elections of the Iranian people, people’s right of sovereignty and the election was usurped and stolen from the Iranian people.”

“The future has never been and will not be submissive and obedient. All the defenders of the Islamic rule, writers and officials, those who submit and accept unjustly the continuation of this rule, are vicious – whether those who have been sitting in the leadership experts or those in the seemingly national parliament,” the female political prisoners added in their letter to the Iranian people on February 16.

Earlier, another political prisoner Soheil Arabi described the parliamentary elections as disgusting publicity and said, “Given the recent crimes by the mullahs’ rule, our reaction to this election should be further than boycotting alone.”

“We don’t let those who opened fire on the people who protested the imprudence, tyranny, and corruption of the mullahs’ rule and targeted the plane of our intellectuals by their missiles to hold this disgusting [elections]. We don’t recognize the Islamic Republic [regime]… The time of a peaceful interaction is up, and we will tirelessly struggle to overthrow this dirty, criminal regime. We aren’t worried about what happens after the overthrow of the Islamic Republic. Because we can make a fundamental change in Iran and build up our homeland,” Soheil Arabi wrote in his letter on February 12.

AFP: An Iranian student activist has been sentenced to...

Iranian authorities have settled on widespread and heavily publicized...