Reuters reported on August 16 that Lebanese Hezbollah would begin importing fuel from the Iranian government. This has been opposed by many Lebanese politicians.

It was first in mid-July 2020 that Hassan Nasrallah, the secretary-general of Hezbollah in Lebanon, announced his readiness to buy and import fuel from Iran.

At the time, on July 10, Lebanese Energy Minister Raymond Ghajar announced that Beirut had no plans to do so.

Hassan Nasrallah had said at the time that he had begun talks with the Beirut government to consider the supply of oil and gasoline derivatives from Iran buying with the Lebanese lira, as it could ease pressure on Lebanon’s foreign exchange reserves.

Following these remarks, the Lebanese Minister of Energy added that at present he has no plans to negotiate with the Iranian government for fuel imports and that current negotiations with Iraq are underway.

Following Hassan Nasrallah’s remarks, the then US Secretary of State Mike Pompeo said that such a thing was unacceptable and that the US government would do everything to stop the sale of Iranian oil.

He added that they will not allow the Iranian government, as the biggest sponsor of terrorism in the world, to sell oil and give its money to Hezbollah.

After these remarks and after the crisis of gasoline shortage in Lebanon while protests escalated, Nasrallah again made the same statements about the import of gasoline from Iran.

On June 25, 2021, Nasrallah reiterated that “I want to stress that I promised and I’m still promising … if we have to go to Iran to get gasoline and fuel oil, we will, even if it causes a problem.”

He added that all technical facilities have been prepared for this possibility. Meanwhile, Lebanese Prime Minister Hassan Diab at the same time approved the import of fuel in pounds.

Nasrallah’s claim came as he announced that he would not import Iranian fuel through the Lebanese Central Bank to avoid US sanctions.

In other words, the process of importing gasoline from Iran by Hezbollah is non-transparent and includes money laundering laws.

At the same time Dorothy Shea, the US ambassador in Beirut, said in a television interview that imports from Iran were not a good solution to the fuel crisis in Lebanon.

She added: “What Iran is looking for is some kind of satellite state that they can exploit to pursue their agenda.”

Subsequently, on June 25, 2021, Lebanese Prime Minister Hassan Diab announced that he agreed to the plan to reduce fuel subsidies.

With the reduction of fuel subsidies by the Lebanese government, the price of fuel increased from 1,500 Lebanese pounds to 3,900 pounds.

Hassan Nasrallah reappeared on Wednesday, August 4, following the reduction of fuel subsidies by the government, and announced that if the government could not do anything, we would import fuel, and that there is some time needed and that the Hezbollah members are in Iran to import the fuel.

In the meantime, two oil tankers were carrying illegal fuel, and one of them was seized, during gasoline distribution, while a huge explosion took place and nearly 20 died and 79 were wounded.

Some eyewitnesses said the fire and explosion were intentional so that Hezbollah could carry out its intentions. Finally, on August 6, Hassan Nasrallah announced that he would begin importing gasoline and diesel from Iran. 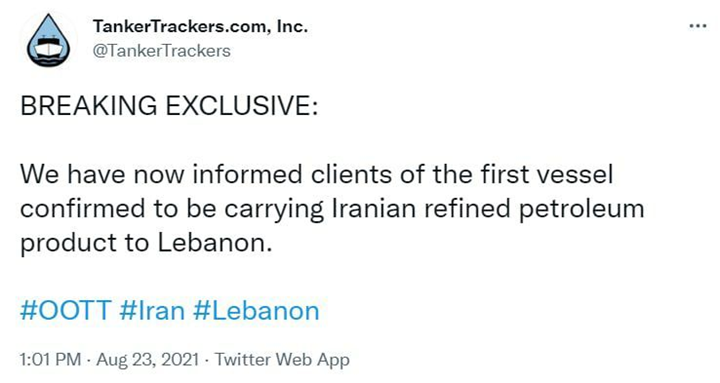 Saad Hariri, the former Lebanese prime minister has said that importing fuel from Iran makes Lebanon dependent on a country that is under the heavy US and the international community, and that this will be a tragedy for Lebanon, as sanctions against Venezuela have intensified.

Hariri also reacted to Nasrallah’s remarks that the Iranian government’s fuel ships for Lebanon had been declared Lebanese territory, calling it a risky military equation, and asked if Lebanon had become a province of Iran.

Hariri revealed another story, adding that Hezbollah is aware that the Lebanese fuel crisis is due to its smuggling to serve Syria, so it is better to stop fuel smuggling to Syria instead of blaming the Lebanese people.

In addition to Hariri, Samir Geagea, militia commander who serves as the executive chairman of the Lebanese Forces since 1986 in protest of Hezbollah’s action while questioning the Lebanese President Michel Aoun Nasrallah’s ally, he asked Aoun that has he allowed Hezbollah to take over Lebanon’s economy after dominating security, military, and strategic affairs?

The current President of the Lebanese Kataeb Party Samy Gemayel also stated that Lebanon is not under siege now, but that this will happen very soon, and that Nasrallah will soon impose sanctions on them.

Given Hezbollah’s efforts to smuggle fuel with the help of the Iranian government, whose oil sales are subject to severe US sanctions, there is a threat that it will bring the Lebanese trade, which is facing its toughest economic challenge, under US sanctions.

On the other hand, the profits from fuel imports from Iran do not go to the pockets of the bankrupt Lebanese government, which may cure even a small pain, but go directly to the pockets of Hezbollah, which is used for the terrorist intentions of this group.