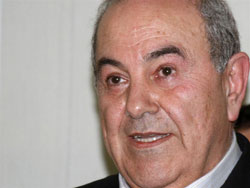 But the poll victory of Allawi’s Sunni-backed Iraqiya bloc, confirmed by an 11-day manual recount of 2.5 million votes cast in the Iraqi capital, stood on shaky ground as Iraq’s two major Shi’ite coalitions have already announced an alliance to form the largest bloc in parliament.

Allawi has insisted the election win gave him the first right to form a new government but the union of Maliki’s bloc with the Iran-friendly Iraqi National Alliance, the third-place finisher, could sideline him and anger Sunnis, raising fears of renewed sectarian conflict as U.S. troops prepare to leave.

Together, State of Law and INA would have 159 seats, four short of the needed parliamentary majority, making another Shi’ite-dominated government likely more than seven years after the U.S.-led invasion that ousted Sunni dictator Saddam Hussein.

Maliki had demanded the vote recount in Baghdad, alleging fraud. But when they finished the counting Friday, elections officials said they had found no signs of any fraud, manipulation, or “big mistakes.”

“I hope that all the political entities calm down,” IHEC spokesman Qassim al-Aboudi said in announcing the results on Sunday. “The process has no defect and all the claims of fraud were not right.”

Baghdad, Iraq’s capital and most populous city, was the biggest prize in the election with more than 20 percent of the seats in the 325-seat parliament.

Mustafa al-Hiti, a senior member of Iraqiya, said Allawi’s bloc had been confident the recount would confirm the result.

“Unfortunately, State of Law delayed the formation of government for a month or more due to allegations that were not confirmed in reality and did not change any results,” Hiti said. “We hope to compensate the Iraqi people for this delay and expedite forming a government.”

IHEC said it would publish the results Monday and anyone with objections would have three days to file an appeal.

After that, the results will be sent to the Supreme Court for certification. The court has no time limit but elections officials said they did not expect a long delay.

The length of time it has taken to count ballots from the March 7 election and move on to certification has raised concerns of a protracted political vacuum that renders Iraq vulnerable to a resurgence of sectarian warfare.

After the last parliamentary election in 2005, sectarian violence exploded when politicians took more than five months to negotiate a government. Thousands died in the worst of the fighting during 2006 and 2007.

Overall violence has dropped sharply since, but attacks by suspected Sunni Islamist insurgents have killed scores of people in the 10 weeks since the vote, including at least 125 in a wave of bombings and shootings across the country six days ago.

Despite the violence, U.S. officials say they are on course to draw down troops from about 94,000 now to 50,000 by August 31, when Washington is scheduled to formally end combat operations.

U.S. forces are scheduled to depart by the end of 2011, leaving security to Iraq’s 650,000-strong military and police.

While the recount did not change the coalitions’ seat totals, small changes in the tallies would mean some winners would lose their seats to other members of the same bloc.

“For example, Omar can replace Mohammed… but the number of the seats stays as is, there is no change,” said Saad al-Rawi, one of IHEC’s nine commissioners.

Some of the change in the vote tallies resulted from a decision in April by a review panel to discard votes for 52 candidates with alleged links to Saddam’s outlawed Baath Party. Nineteen of those candidates were in Baghdad.

“The votes for the 52 candidates were wiped out so there were small differences,” Rawi said.

Russian nuclear chief due in Iran in February