AFP: Young French academic Clotilde Reiss flew home from Iran on Sunday, 10 months after she was arrested and accused of spying, as France denied striking a secret deal with Tehran. 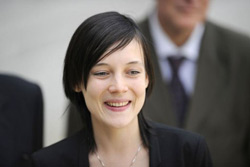 PARIS (AFP) — Young French academic Clotilde Reiss flew home from Iran on Sunday, 10 months after she was arrested and accused of spying, as France denied striking a secret deal with Tehran.

A government jet brought the 24-year-old researcher to an airbase outside Paris after her lawyer paid Iran a fine of more than a quarter of a million dollars, and she was whisked to the office of President Nicolas Sarkozy.

Speaking briefly to reporters after her meeting with Sarkozy, she thanked the French leader for protesting her innocence and paid tribute to her former fellow detainees, two of whom have been put to death.

“They treated my like a sister,” Reiss said of fellow prisoners she met in Iranian custody, paying “particular homage … to the two men you saw on television beside me at my trial, who have been executed.”

Her arrival brought an end to a long drama which raised tensions between France and Iran and saw the young scholar paraded at a televised show trial and spend six weeks in Tehran’s notorious Evin prison.

The release came after a French court ruled against a US extradition request for an Iranian engineer and shortly before another judge was to rule on the parole request of a jailed Iranian assassin.

But French Foreign Minister Bernard Kouchner angrily insisted there had been “no haggling and no pay off” to ensure the release and said there had been no link between the French and Iranian cases.

“This series of judicial rulings — in France we don’t influence judges’ decision — has nothing to do with any haggling, any alleged bargaining,” he said, in an interview with Radio J.

But Sarkozy warmly thanked presidents Luiz Inacio Lula da Silva of Brazil, Abdoulaye Wade of Senegal and Bashar al-Assad of Syria for their “active role” in the release, suggesting some backroom dealing must have taken place.

Wade told RTL Radio that he had offered as chairman of the Organisation of the Islamic Conference to intercede with Iran’s President Mahmoud Ahmadinejad on France’s behalf, before being asked to stand down.

He accused Sarkozy’s office of derailing his negotiations and said that if he had been allowed to continue “Clotilde Reiss would have been freed six months ago. I had a very precise programme for her release.”

Reiss was arrested on July 1 after demonstrations against the results of Iran’s disputed presidential election.

She was put on trial in August on charges of acting against national security, at a time when relations between Paris and Tehran were already bitterly hostile because of French concerns over Iran’s nuclear programme.

At her first court appearance, which was televised, Reiss admitted taking part in anti-government protests “for personal reasons” and writing a report for an institute linked to the French embassy’s cultural service.

For most of her time on remand she has been allowed to remain in the French embassy, but there were fears her case could lead to a long Iranian jail term.

On Saturday, Reiss’ lawyer Mohammad Ali Mahdavi Sabet told AFP the court fined her 285,000 dollars (230,000 euros), “which I paid”. He said he did not appeal the ruling, which he said was “almost an acquittal”.

He said the court sentenced Reiss to two terms of five years, then commuted this to a fine under a “clemency decision” because of Reiss’ situation.

Described by friends as a serious scholar passionate about Iranian language and culture, Reiss was arrested shortly before flying home after completing a six-month teaching and research assignment in the city of Isfahan.

Her release came a few days after a French court ruled against the United States’ extradition request for Iranian engineer Majid Kakavand, who has been held in France since March 2009.

Kakavand, who was freed and flew home last week, was arrested in France after Washington accused him of buying restricted electronic components and exporting them to Iran via Malaysia between 2006 and 2008.

“Ms. Reiss’ release has nothing to do with Mr. Kakavand’s release,” Iranian foreign ministry spokesman Ramin Mehmanparast said in Tehran, according to the Fars news agency.

“The judiciary examined her case and she was allowed to leave according to the verdict,” the spokesman said.

But both Kakavand’s name and that of another Iranian held in France, Ali Vakili Rad, have often come up in connection with the Reiss case.

A French court is due to rule on Tuesday on a parole request by Vakili Rad, who was convicted in 1994 of the 1991 murder of the deposed shah’s last prime minister Shapour Bakhtiar.

U.S. to Back Europeans On Incentives for Iran

Washington Post: President Bush has decided to back European...