AP: Iraq’s Supreme Court on Tuesday took the first major step toward resolving the nation’s election crisis, ratifying the results and declaring a secular alliance the biggest winner in the March 7 parliamentary vote. 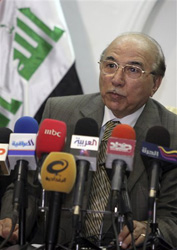 Despite the official court approval of the results, the government impasse remains far from over as it could take weeks if not months before lawmakers choose new leaders.

Based on those results, “we decided to ratify the final results of the general parliament elections for 2010,” al-Mahmoud told a news conference at the Supreme Court.

Iraqiya won two more seats than its top rival, the State of Law coalition led by Prime Minister Nouri al-Maliki. But none of Iraq’s major political coalitions captured an outright majority in the 325-seat legislature, leaving the country in a political vacuum.

Iraq’s next government will be tasked with overseeing a massive U.S. military withdrawal from the war-battered nation and its fledgling democracy, with the number of American troops to shrink to 50,000 by the end of August. A security agreement requires all U.S. troops to leave by the end of 2011.

Iraqi, U.S. and U.N. officials alike fear the political void could lead to widespread violence as insurgents and extremists seek to take advantage of the chaos as the American troops leave.

In a statement, the U.S. Embassy in Baghdad called Tuesday’s court ruling “an important step in the right direction as Iraq undertakes what will be a historic and peaceful transition of power from one elected government to another.”

Frustrated with its second-place finish, State of Law has demanded ballot recounts, charges of fraud and court challenges in an unsuccessful bid to pick up more seats and knock Iraqiya out of the lead.

Hussein al-Shaalan, a senior Shiite politician from Iraqiya, said Tuesday’s ruling should ensure that “we will stay the biggest bloc” once parliament meets.

“This is the will of the Iraqi people who voted for us,” al-Shaalan said.

Al-Maliki did not mention the court’s ruling when he spoke Tuesday at the Kurdish city of Sulaimaniyah in northern Iraq. However, his visit to Kurdistan — his first since the March election — was significant because he will need Kurdish support to cobble the majority needed to form a government.

In an interview with The Associated Press, Iraqi Oil Minister and senior State of Law member Hussain al-Shahristani said the alliance would respect the ruling even if it remains convinced it was robbed of seats.

Under Iraq’s constitution, President Jalal Talabani now has 15 days to call parliament to its first session, where lawmakers could vote to elect a speaker and a new president of the republic.

The new president will have another 15 days to name the largest bloc, based on the number of seats it holds. The new bloc will in turn name the next prime minister and piece together a new government. It also will be able to reward allies with Cabinet seats and top government jobs in a process that could take months.

However, in a March 25 legal opinion, the Supreme Court left open the question of whether the biggest bloc would be that which won the most seats in the March vote — Allawi’s alliance in this case — or if it could be one formed after the balloting.

In May, al-Maliki’s State of Law bloc agreed to join forces with the religious Iraqi National Alliance to form a so-called “super-Shiite” coalition with a combined 159 seats, only four shy of a simple majority.

It’s expected that Iraqiya and the super-Shiite coalition will now battle over which should be legally considered the largest bloc in parliament.

Al-Mahmoud said the largest bloc will be officially declared after parliament meets. Either way, the court approval of the results is final and cannot be appealed.

The results certified Tuesday did not include decisions on two candidates — one from Iraqiya and another from INA — whose eligibility is being challenged.

By Pooya Stone The US produced on Wednesday limpet...