Reuters: A member of the cross-sectarian Iraqiya bloc that won Iraq’s March parliamentary election was shot dead on Saturday, the second Iraqiya politician to be killed since the vote, the bloc said. 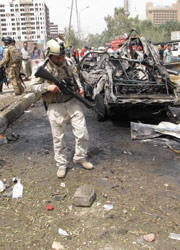 MOSUL, Iraq (Reuters) – A member of the cross-sectarian Iraqiya bloc that won Iraq’s March parliamentary election was shot dead on Saturday, the second Iraqiya politician to be killed since the vote, the bloc said.

The victim, Faras al-Jubouri, was a candidate on Iraqiya’s list for parliament but did not win a seat in the 325-seat assembly.

A police source, who asked not to be named, said Jubouri was shot dead by gunmen in police uniform overnight in his home near the restive northern city of Mosul.

He said the men searched several homes in Jubouri’s village saying they were looking for mortars. On entering Jubouri’s home, “they tied up his brother and when he came downstairs they opened fire and killed him,” he said.

On May 24, gunmen killed elected candidate Bashar Mohammed Hamid al-Aqidi, also in Mosul, prompting complaints from Iraqiya that the bloc was being targeted in a campaign of violence since narrowly winning the March 7 election.

“Iraqiya was targeted before the election, and the attacks are continuing,” senior Iraqiya official Intisar Allawi told Reuters.

“We don’t know who we will lose next. We call on the government to provide protection for winning candidates.”

The Supreme Court on June 1 certified the results of the election, affirming Iraqiya’s narrow victory. But Iraq is still without a government, fuelling tensions.

Iraqiya is led by former Prime Minister Iyad Allawi and was heavily backed by voters from Iraq’s Sunni minority.

The alliance fell short of a majority, and the main Shi’ite blocs of incumbent Prime Minister Nuri al-Maliki and anti-U.S. cleric Moqtada al-Sadr are negotiating to form a coalition.

(Reporting by Jamal al-Badrani in Mosul and Muhanad Mohammed in Baghdad; Writing by Matt Robinson; Editing by Jon Boyle)