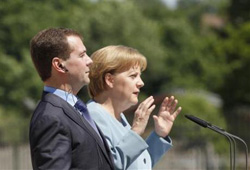 “The situation is this: basically, an agreement on sanctions exists,” the president said in Germany after talks with Chancellor Angela Merkel. “We hope that the voice of the international community is heard by Iranian leadership.

“Such expressions of irresponsible behaviour cannot be continued. What is said internationally needs to be listened to. Only this way can the most complex tasks be solved,” he said.

Russia is one of five permanent and veto-wielding UN Security Council members — along with the United States, China, Britain and France — who the White House hopes will approve fresh sanctions as early as next week over the Islamic republic’s sensitive nuclear work.

Both Russia and China have previously been more reticent than the others on sanctions, but Russian Foreign Minister Sergei Lavrov said on Friday that “paralysing sanctions” had been purged from the new draft to take into account “the economic interests” of Moscow and Beijing.

Iran is already under three sets of UN sanctions for its refusal to suspend enrichment of uranium, which can be used as fuel for nuclear power stations and in atomic weapons.

Merkel, whose country is part of a six-nation group negotiating with Iran and who has been strident in her calls for taking a tougher line, said she expected to new resolution to be voted on soon.

“It looks as though new sanctions can be approved by the UN Security Council in the near future,” she said in Meseberg, north of Berlin.

“The time has now come that if nothing changes qualititatively then such sanctions must be approved. I am happy that we can stand here today … and say that this is a joint position including not only the EU, the US and Russia, but also from China.

“This is a big, important step from the international community.”

Russia, which like Germany has close commercial ties with Iran, has become frustrated by Iran’s behaviour in recent months.

President Mahmoud Ahmadinejad last month launched a stinging attack on Moscow accusing it of “siding with those who have been our enemy for 30 years.”

“If I were in the Russian president’s shoes I would be more cautious in commenting and decision making about issues pertaining to the great and strong nation of Iran.”

Senior US officials have said they are forging ahead with a resolution without Brazil and Turkey, two non-permanent Security Council members that brokered a nuclear fuel swap deal with Iran aimed at forestalling sanctions.

Under the deal reached last month Iran committed to deposit 1,200 kilogrammes (2,640 pounds) of low-enriched uranium in Turkey in return for reactor fuel.

But the accord drew a cool reaction from world powers led by the United States.