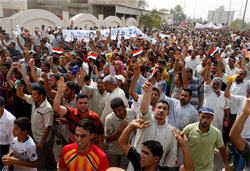 The unrest came a day after more than 30 people were killed in a wave of violence targeting government officials, Iraqi security forces and those seen as allied with them.

Police in Basra said one protester died and three were wounded when security forces opened fire on the demonstrators. They said five protesters were arrested.

Hundreds rallied outside Basra’s provincial council building, demanding a more consistent electricity supply to their homes and businesses and carrying banners reading: “Return electricity to us” and “Prison is more comfortable than our homes.”

Police said they tried to control the crowd but protesters started throwing stones at the council building and set fire to a guard’s cabin, prompting the troops to open fire. They said shots were first fired into the air to disperse the crowd, but that failed to stop the violence.

In a statement on Saturday, Prime Minister Nouri al-Maliki asked the people of Basra to remain calm and said he was sending a delegation of officials to Basra to address the city’s electricity problems.

Anger over the government’s failure to provide public services more than seven years after the U.S.-led invasion has been high.

Iraqis have been plagued with severe electricity outages that worsen as summer temperatures soar above 120 degrees Fahrenheit (50 degrees Celsius). They have also been suffering from water shortages and poor water quality due to low levels and high sedimentation in the rivers.

On Friday, gunmen killed an employee of a local irrigation department and three of his family members as part of an apparent tribal dispute over water distribution west of Baghdad.

Irrigation department employees have increasingly been targeted in the area as rival tribal factions battle over the dwindling water resources.

Also on Saturday, officials said gunmen killed three anti-al-Qaida fighters after opening fire at a checkpoint south of Baghdad manned by a local government-backed group known as an Awakening Council.

The Council is part of a movement that has been key to a sharp drop in violence in recent years.

Nobody claimed responsibility for Saturday’s attack in Jibala, 40 miles (65 kilometers) south of Baghdad, but al-Qaida and other insurgents frequently target Awakening Council members as revenge or to discourage others from joining.

The violence highlights fears of growing unrest as the country remains deadlocked months after March’s inconclusive parliamentary elections have failed to produce a new government.

The putative winner of the contests, former Prime Minister Ayad Allawi, announced Saturday that “international intelligence” services had told him that he was the target of an assassination plot.

He can no longer use a special airport for VIPs in central Baghdad because he was been told snipers are on a lookout to kill him.

While Allawi acknowledged that there has yet to be an actual attempt on his life, he was taking the latest warnings seriously.

Allawi’s Sunni-backed Iraqi bloc won slim victory in the elections, but his main conservative Shiite opponents have united into a larger coalition that has good chance of heading the new government.

Italy to send envoy to Iran