INTERVIEW – Iraqi Kurds to clamp down on oil smuggling 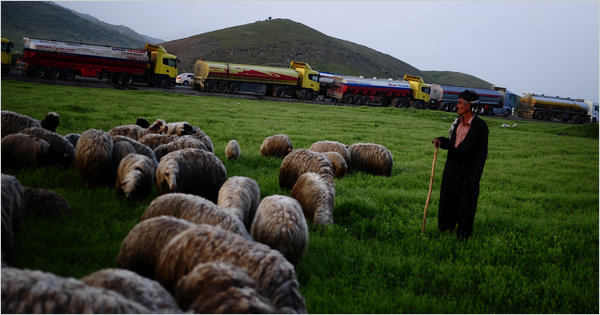 By Ahmed Rasheed and Jim Loney

Salih also said in an interview with Reuters that he hoped legal exports of crude from Kurdistan, which were halted last year amid a dispute with Baghdad, could be restarted quickly.

But he said his government was still awaiting a decision from the central government on how exactly foreign oil firms would be paid for investment costs.

In an interview at his office in Arbil, Salih said his government was not aware of any illegal crude traffic across Iraqi Kurdistan’s borders despite reports of long lines of tankers crossing into neighbouring Iran every day.

The reports said the trucks carried both crude and refined oil products, and challenged U.S. efforts to impose sanctions on Iran over its nuclear research programme.

Under Iraqi law any export of crude has to be done through the State Oil Marketing Organisation, the federal government marketing company.

“We have no interest in being a violator of either the Iraqi constitution or international law,” he said. “I can tell you we have no knowledge of any crude oil passing through the borders of Kurdistan and if they do, these are illegal and illicit.”

Among the measures passed by his cabinet on Monday were enhanced monitoring of border crossings to prevent unauthorized products from leaving, and increased surveillance of tankers to ensure they comply with Kurdish and federal law, Salih said.

He also said his government would make sure refineries and plants supplying the tankers were regulated and that fuel from other areas of Iraq was properly monitored and accounted for.

Salih said fuel trade across the border was hardly unique to Kurdistan. “It is taking place across all the borders of Iraq.”

Salih said Iraq and its Kurdish region were both losing billions of dollars because of the halt of exports from Iraqi Kurdistan and placed the ball for resumption back in Baghdad’s court.

Arbil and Baghdad have been at loggerheads over oil contracts the KRG signed with foreign oil firms like Norway’s DNO and Turkey’s Genel Enerji.

Oil exports flowed briefly last year from two fields, Taq Taq and Tawke, before the central government’s refusal to pay the companies turned off the tap.

The Iraqi cabinet has since approved a proposal that would compensate the firms for their exploration and production costs but would not cover their profits.

“We have asked Baghdad to give us a specific proposal about how these companies will be paid for their costs,” Salih said.

“We are waiting for the results of this matter and I very much hope that we and our colleagues in Baghdad will be able to settle this quickly because every barrel of oil lost is a barrel lost for all the Iraqi people.”

Iraqi Oil Minister Hussain al-Shahristani said recently that he was “surprised” the Kurds had not resumed exports and said they should be started immediately.

The KRG says it has the right to regulate its own oil industry while Baghdad says the contracts were illegal because they were signed without its approval and consent.

“I am hopeful … that things are on the right track but I hope we can expedite it and get it done,” Salih said. “Get it done.”

By Jubin Katiraie In the 1980s, the Iranian authorities...

70 holidaymakers die in Iran road accidents in past 3 days