Iraq tries to play down general’s remarks over US withdrawal

The Guardian: The Iraqi prime minister, Nouri al-Maliki, has made a sudden visit to senior defence officials a day after the country’s most senior soldier declared his forces would not be capable of securing Iraq’s borders until 2020. 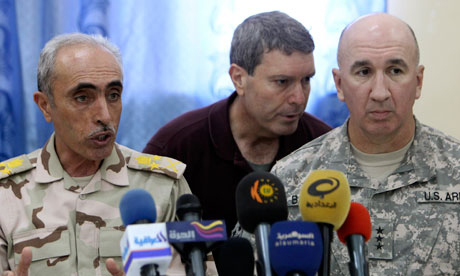 The Iraqi prime minister, Nouri al-Maliki, has made a sudden visit to senior defence officials a day after the country’s most senior soldier declared his forces would not be capable of securing Iraq’s borders until 2020.

The visit seemed prompted by Lieutenant General Babakir Zebari’s remarks yesterday, in which he repeated his claim that US forces would need to maintain a presence in Iraq beyond the end of 2011, the current deadline for their exit.

“If I were asked about the withdrawal, I would say to politicians: the US army must stay until the Iraqi army is fully ready in 2020,” he said.

Iraq and the US are yet to structure an agreement spelling out future defence arrangements after the end of the mandated withdrawal but both sides have indicated that future bilateral ties could extend to border patrols as well as ongoing training and mentoring.

A senior US official told the Guardian this week that any future military presence here would be “in the tens, or low hundreds, but will be far short of an occupation force”.

Support for an ongoing US presence also came last week from an unlikely quarter, Saddam Hussein’s former deputy, Tariq Aziz, who told the Guardian that Barack Obama would be “leaving Iraq to the wolves” if he continued to withdraw troops.

As the 31 August deadline for the withdrawal of almost all US combat forces draws near, Iraqi officials appear increasingly skittish about what will be left behind. While not a divergence from his previous remarks, the timing of Zebari’s comments has given them an extra impetus.

Security has been steadily deteriorating throughout central Iraq throughout much of the past six months, which has seen the country left largely leaderless as political blocs feud over who has the right to form a government.

Although the US presence has been loathed by large sections of society, many Iraqis are now fearing that their absence from the streets of towns and villages will give comfort to restive militia groups who appear to be mounting a summer push.

The absence of combat forces in Baghdad is already apparent, with very few US convoys on the road and no Apache attack helicopters patrolling the skies over the capital, despite nightly rocket attacks on the international zone.

Rocket attacks have increased sharply over the past month. US officials say they are being launched by Iranian-backed Shia militias who want to create the perception that they are forcing foreign forces into a humiliating retreat. Over the past 18 months, ever-present US surveillance drones have acted as a deterrent to rocket-firing teams who typically attack from the east and south of the city.

Zebari’s comments appear to contradict recent remarks from US officials, including the commanding general in Iraq, Ray Odierno, who this week said the Iraqi military was “ready to take over”.

They also fly in the face of numerous warnings from the Sons of Iraq leadership, which was allied to the US military throughout the worst of the sectarian fighting three years ago.

Iran arrests man on charges of spying for Israel

AP: Iranian authorities have arrested a man on charges...