British ambassador to Iran hits back after ‘thick’ jibe

The Daily Telegraph: The UK ambassador to Iran has angrily attacked comments by a senior Tehran government minister that the English are “a bunch of thick people”.

The UK ambassador to Iran has angrily attacked comments by a senior Tehran government minister that the English are “a bunch of thick people”. 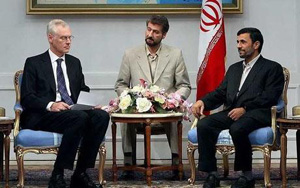 Simon Gass said the comments were “illogical and worthless” and showed “a lack of respect for human dignity”.

The remarks were made by Mohammad-Reza Rahimi, a vice-president of Iran, in a speech on Monday to education officials.

Mr Rahimi railed against various countries supporting UN sanctions on Tehran, calling Australians “a bunch of cow herders” and saying South Koreans should be “smacked in the face until they become human”.

He said: “England has nothing. Its inhabitants are not human, its officials are not responsible, and it doesn’t even have any natural resources. [They are] a bunch of thick people ruled by a mafia.

“They have plundered the world in the last 500 years and the young lad in charge now is even more stupid than his predecessor,” Mr Rahimi added.

Mr Gass posted a link from his Twitter account to a statement posted on the UK embassy website in Farsi in which he strongly criticised the remarks.

“To discuss the political differences between countries is natural, but when a high-ranking official who represents the Islamic Republic of Iran makes such insulting remarks about the people of another country, it reflects badly only on the person who made such remarks,” he wrote.

“To state that the British are not human and to call them thick shows a lack of respect for human dignity and is an illogical and worthless remark.”

It comes after Iran said it would mass produce armed replicas of the Bladerunner 51, the British-built speedboat hailed among the fastest in the world, for its navy in the Gulf.

Reuters: Iran looked set to avoid being reported to...