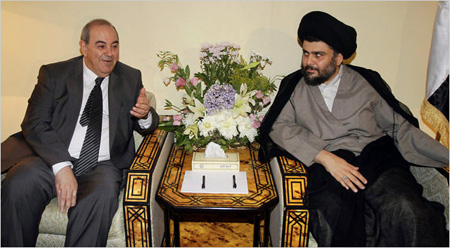 Iraq has been in a political deadlock since a March 7 election which produced no outright winner, raising tensions ahead of an end to U.S. combat operations this month and fuelling concerns of a return to widespread violence.

Allawi and members of cleric Moqtada al-Sadr’s political group made the announcement after Iraqiya broke off negotiations with incumbent Nuri al-Maliki’s Shi’ite-led State of Law alliance on Monday.

“In the next few days and thereafter, we are going to intensify our discussions to reach an important, mutual stance on what needs to be done to form the next government,” Allawi told reporters at a news conference.

In one of the bloodiest attacks this year, at least 57 recruits and soldiers were killed and 123 wounded earlier on Tuesday when a suicide bomber blew himself up at an army recruitment centre in Baghdad.

Allawi’s Iraqiya won two seats more than Maliki’s State of Law, but neither party won the majority needed to govern and no agreement has emerged from coalition talks.

The Sadrists, who won around 40 seats, will be looking to play a larger role in the next government.

The anti-American movement has called for a series of oil contracts — seen as key investment deals — signed by Iraq with major oil firms like BP and Shell to be re-written.

While Iraqis had hoped the election would result in greater stability and prosperity seven years after the U.S.-led invasion which ousted Saddam Hussein, persistent attacks have raised doubts over the ability of the war-torn nation to rebuild.

The political uncertainty and ongoing violence could deter foreign investment, desperately needed in a country ravaged by decades of war, sanctions and neglect. (Writing by Serena Chaudhry; Editing by Michael Christie/Maria Golovnina)