Tony Blair: West should use force if Iran ‘continues to develop nuclear weapons’

The Guardian: The west should use force against Iran if it “continues to develop nuclear weapons”, Tony Blair said today, aligning himself with US hawks who have called for strikes against Iranian nuclear sites. 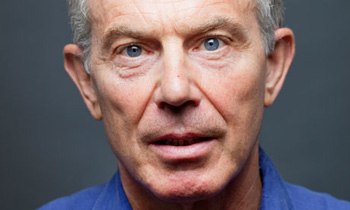 The west should use force against Iran if it “continues to develop nuclear weapons”, Tony Blair said today, aligning himself with US hawks who have called for strikes against Iranian nuclear sites.

The former prime minister made his comments in a BBC interview to publicise his memoirs, A Journey, which are published today.

Blair said it was “wholly unacceptable” for Tehran to seek a nuclear weapons capability and insisted there could be “no alternative” to military force “if they continue to develop nuclear weapons”.

Speaking to Andrew Marr in a BBC interview to be broadcast tonight, Blair says: “I am saying that I think it is wholly unacceptable for Iran to have a nuclear weapons capability and I think we have got to be prepared to confront them, if necessary militarily. I think there is no alternative to that if they continue to develop nuclear weapons. They need to get that message loud and clear.”

Iran is enriching uranium at its main, internationally-monitored plant at Natanz and is building a second enrichment facility run by the Revolutionary Guards inside a mountain at Fordo, near Qom, southwest of Tehran. Enriched uranium can be used as fuel to power nuclear reactors as well as to make the fissile core of an atom bomb.

Tehran insists its nuclear activities are purely peaceful and argues that as a signatory to the Nuclear Non-Proliferation Treaty (NPT) it has the right to peaceful nuclear technology. But the UN last month imposed a fourth round of sanctions on Iran because of fears it may be secretly developing nuclear weapons.

The US and Israel – an undeclared nuclear power outside the NPT – have both refused to rule out military action against Iran.

In his exclusive interview with the Guardian, Blair elaborates on why it is unacceptable for Iran to have nuclear weapons, linking this to the 9/11 attacks on the US. The former prime minister wishes he had seen earlier that 9/11 had “far deeper roots” than he thought at the time.

“The reason for that, let me explain it, is that in my view what was shocking about September 11 was that it was 3,000 people killed in one day but it would have been 300,000 if they could have done it,” Blair said, appearing to equate al-Qaida with Iran. “That’s the point … I decided at that point that you cannot take a risk on this. This is why I am afraid, in relation to Iran, that I would not take a risk of them getting nuclear weapons capability. I wouldn’t take it.

“Now other people may say: ‘Come on, the consequences of taking them on are too great, you’ve got to be so very careful, you’ll simply upset everybody, you’ll destabilise it.’ I understand all of those arguments. But I wouldn’t take the risk of Iran with a nuclear weapon.”

In the postscript to his book, Blair writes: “Iran with a nuclear bomb would mean others in the region acquiring the same capability; it would dramatically alter the balance of power in the region, but also within Islam.”

Blair’s approach to Iran aligns him with US hawks such as John Bolton, the former American ambassador to the UN, who believes that Israel should have attacked Iran before it started loading fuel into its first nuclear power plant in the southern port city of Bushehr on 21 August, although nuclear experts say Bushehr has no link with Iran’s secretive uranium enrichment programme, seen as the main “weaponisation” threat, at other installations.

AFP: An Australian man indicted by a US federal...