AFP: Iran has dismissed as “unacceptable” the continued deployment of American troops in Iraq as US President Barack Obama was to announce on Tuesday the end of combat operations in the country. 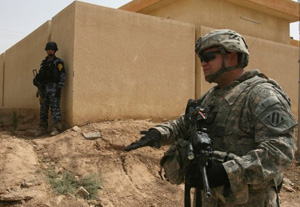 TEHRAN (AFP) — Iran has dismissed as “unacceptable” the continued deployment of American troops in Iraq as US President Barack Obama was to announce on Tuesday the end of combat operations in the country.

“You see in practice that the massive presence of US forces under different pretexts such as training (Iraqi) forces is not acceptable,” foreign ministry spokesman Ramin Mehmanparast told reporters.

It “shows that they have not taken serious measures for pulling forces out of Iraq,” he said.

Seven years after Iraq’s invasion, Obama marks on Tuesday the symbolic date of the end of US combat operations in the country in a White House speech.

The size of the US force in Iraq has dropped below a symbolic threshold of 50,000 troops. Starting Wednesday, their mission will be to “advise and support” the Iraqi army.

“We believe if American and other foreign forces go back to their own countries and leave security in the region to its people, stability and security will be restored faster,” Mehmanparast added.

Shiite-majority Iran has enjoyed warm ties with Iraq since the March 2003 US-led invasion that overthrew Iraqi dictator Saddam Hussein but it is unnerved by the presence of US forces in its western and eastern neighbours — Iraq and Afghanistan — and regularly calls for a complete pullout.

The United States, which is leading international efforts against Iran’s nuclear programme, has never ruled out a military strike to stop the atomic drive.

Under a timetable set by Obama when he took office, all US troops are supposed to be out of Iraq by the end of 2011, although officials have said a small residual military presence is likely to remain indefinitely.

Reports from the capital