AFP: US spy agencies view political stalemate in Iraq as the biggest threat to security in Iraq as the American military scales back its mission in the country, a senior official said on Tuesday. 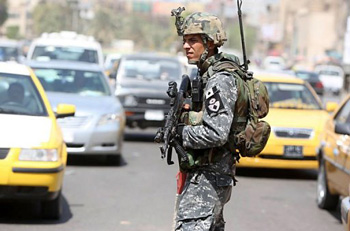 WASHINGTON (AFP) — US spy agencies view political stalemate in Iraq as the biggest threat to security in Iraq as the American military scales back its mission in the country, a senior official said on Tuesday.

Although severely weakened, Al-Qaeda’s branch in Iraq will also remain a danger as well as Iran’s attempts to foment attacks on Iraqi authority, the senior intelligence official, who asked not to be named, told reporters.

“The greater concern is political reconciliation” among the country’s Sunni, Shiite and Kurdish leaders, said the official.

Iraqi politicians have so far failed to form a new government since March parliamentary elections, and the official said rival factions apparently could not agree on how to divvy up key positions in the cabinet.

Iraqi forces had shown themselves capable in countering security threats and a caretaker government could handle the situation for the moment, he said.

But the official warned that the country’s political uncertainty “can’t drag on indefinitely” and that it was “important to get their act together.”

The official said it was unclear when the country’s political vacuum might “reach a point when things fall apart and unravel,” triggering sectarian and ethnic violence.

His comments echoed concerns across the US government over Iraq’s political deadlock, as President Barack Obama marked the formal end to the US combat mission in Iraq.

About 50,000 US troops are remaining in place to “advise and assist” Baghdad government forces, and all American units are to withdraw by the end of 2011 under a security accord with Iraq.

The US military presence that will remain in the interim will play an important role for Iraqis concerned about a revival of sectarian and ethnic bloodshed, he said.

The US contingent “has to have a stabilizing impact,” he said.

Although the Sunni community had concerns about US troops leaving, “the people most concerned about our ultimate departure are Kurds,” he said.

He said Al-Qaeda’s branch in Iraq has been seriously damaged, with much of its leadership knocked out.

Al-Qaeda in Iraq “cannot credibly threaten the stability of Iraq” any longer, with levels of violence drastically reduced, he said.

Al-Qaeda’s manpower in Iraq was 10 percent of what it was four years ago, he said, without offering any estimate of the group’s numbers.

But the militants could erode security if the Iraqi government becomes “complacent” or eases up pressure on them, he said.

Violence peaked in the spring of 2007, he said, citing a chart that showed over 1,000 homemade explosives going off every week and 1,600 attacks a week against Iraqi authorities.

Although Al-Qaeda was still able to stage deadly assaults and to kill civilians, the number of violent incidents had fallen below 200 a week.

Most of the attacks now focused on Baghdad and Mosul, whereas violence in the past had spiked across the country.

A hard-core of Al-Qaeda would likely continue to stage attacks and bombings and it was unrealistic to expect to completely eliminate the threat, he said.

Iran also was expected to continue to provide equipment, training and “refuge” for some militant groups in Iraq “for some time to come,” he said.

But it was difficult to predict how Tehran would react to the reduced US military presence and whether it might step up its role.

“Clearly the Iranians are uneasy with an Iraq next door that’s aligned with the United States,” he said.

And Iran was keen to “create the image of instability” in Iraq, he added.