Bloomberg: President Barack Obama leads Israel and the Palestinian Authority into direct talks starting tomorrow aiming for a big prize: a peace deal that will help stabilize the region and thwart Iran’s bid to expand its influence.

By Nicole Gaouette and Gwen Ackerman 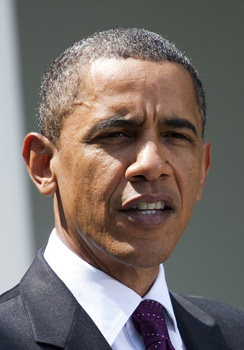 Sept. 1 (Bloomberg) — President Barack Obama leads Israel and the Palestinian Authority into direct talks starting tomorrow aiming for a big prize: a peace deal that will help stabilize the region and thwart Iran’s bid to expand its influence.

Obama is bringing Palestinian Authority President Mahmoud Abbas and Israeli Prime Minister Benjamin Netanyahu together in Washington to seek agreement on security and territorial issues that lie at the heart of their dispute and have defied solution for two decades.

The Israeli-Palestinian conflict has provided openings for regimes seeking to exploit Arab anger for their own purposes, and a resolution could put an end to such maneuvers, said State Department spokesman Philip J. Crowley.

“Iraq in the past and Iran in the present have tried to take advantage of the Middle East conflict to use that sense of grievance” to promote their regional interests, Crowley said in an interview. A peace deal “offers the prospect of a much more integrated, much more constructive region in the future.”

The difficulty of achieving an agreement was underscored yesterday when four Israelis, including a pregnant woman, were shot dead near the settlement of Kiryat Arba as Netanyahu flew to Washington. The armed wing of Hamas, the Islamic movement that rules the Gaza Strip, claimed responsibility, and the Obama administration condemned the attack.

In the near term, Obama will have to find a way around a disagreement over whether Israel extends a 10-month freeze on West Bank settlement construction that threatens to derail the talks just as they begin.

And ultimately, a peace deal will have to resolve core issues including the borders of a Palestinian state, the right of return for Palestinian refugees, the status of Jerusalem and security arrangements for Israel.

At the outset, the talks won’t address such fundamental issues, said a U.S. administration official who spoke on condition of anonymity. The White House goal this week is to have both sides accept Obama’s one-year deadline for an agreement and set out the steps needed to meet that deadline, the official said.

The Israeli government sees the one-year target for a final agreement as achievable, said an Israeli official yesterday, speaking on condition of anonymity.

The talks start the day after a Baghdad ceremony to mark the declared end of the U.S. combat role in Iraq. Obama needs stability in Iraq as he redirects U.S. forces to Afghanistan in a widening effort to subdue the Taliban.

“The U.S. has an enormous stake in all this from a strategic standpoint,” said Hussein Ibish, a fellow at the Washington-based American Task Force on Palestine, which advocates for a peaceful end to the conflict. “It is now a consensus in the foreign policy community and in the military” that establishing Israeli-Palestinian peace is essential to American interests.

“Clearly one way that Iran is increasing its influence in the region is by exploiting the ongoing conflict between Israelis and Palestinians,” Ross said May 5 in an address to the Anti-Defamation League, a New York-based organization created to fight anti-Semitism.

Iran backs the Shiite Hezbollah movement in Lebanon, which fought a month-long war with Israel in 2006, and Hamas, which seized control of Gaza after routing the Fatah forces of the U.S.-backed Abbas in 2007. The U.S. and Israel consider both Hamas and Hezbollah to be terrorist organizations.

Sealing a peace deal would also bolster U.S. credibility in Turkey and in Arab states like Saudi Arabia, said David Rothkopf, a visiting scholar and author at the Carnegie Endowment for International Peace in Washington.

Middle East envoy George Mitchell said in a briefing yesterday that once the summit ends, Netanyahu and Abbas should have direct contact and meet every two weeks.

Obama won’t stand on “some distant sideline cheering the parties on,” and has “been engaged personally from the very beginning,” Mitchell said.

Negotiating teams would work intensely on issues including water and borders, according to another Israeli official.

Former Israeli negotiators say Obama’s goal of a comprehensive peace deal is unrealistic. Yossi Beilin, who negotiated the 1993 Oslo Accords, said the sides are too far apart and should aim instead for a partial agreement to avoid violence that might follow a breakdown of the talks.

Zalman Shoval, who heads an advisory forum on Israel-U.S. relations for Netanyahu, says the sides should reach agreement on a Palestinian state within provisional borders or find some other formula that would give the Palestinians “self- governance” and leave the most difficult issues to be negotiated later.

The looming expiration of the Israeli settlement freeze will provide an early test for the negotiators.

Netanyahu told ministers from his Likud party on Aug. 29 that the Cabinet decision to resume building after Sept. 26 was unchanged. Hours later, Abbas said on state-run Palestine Satellite Television that “Israel will be responsible for the failure of the talks if it continues expanding settlements.”

The consequences of failed talks could be dramatic in the Mideast for Obama, said Shibley Telhami at the Brookings Institution in Washington.

“There’s the potential to end up dealing with crisis after crisis, just as you’re trying to disengage with Iraq and deal with Iran and Afghanistan,” Telhami said.

Reuters: Mohamed ElBaradei vowed on Monday to pursue his...