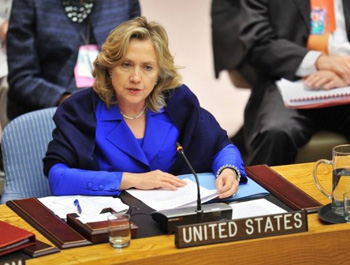 “The secretary agreed that this is becoming of critical importance and we don’t want to see Iraq drift and have a security vacuum result,” Clinton’s spokesman Philip Crowley told reporters.

During their meeting on the sidelines of the UN General Assembly, the two “talked about the importance of Iraq’s leaders stepping up and making decisions and forming a government,” he said.

He said James Jeffrey, who arrived in Baghdad in August as the new US ambassador, is engaged in discussions on the problem, just as Vice President Joe Biden and State Department officials have been in visits from Washington.

“The secretary solicited some ideas from the foreign minister about how the United States will be helpful while making clear that ultimately has to be Iraq’s decision about how to come to agreement on forming a new government,” he said.

But neither man has managed to gain a working parliamentary majority despite months of coalition negotiations, leaving the nation’s politics in limbo amid growing public frustration at the lack of progress.

The deadlock has coincided with the end of US combat operations with Iraq and fed fears that the political vacuum could offer an opening to extremists to further destabilize the country.

AFP: Two Iranian men were hanged in prison on...