AP: Iranian forces crossed into neighboring Iraq and killed 30 fighters from a group it says was involved in last week’s bombing of a military parade, state TV reported Sunday. 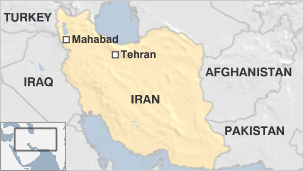 Gen. Abdolrasoul Mahmoudabadi of the elite Revolutionary Guards said the “terrorists” were killed on Saturday in a clash “beyond the border” and that his forces were still in pursuit of two men who escaped the ambush.

While Iran has said in the past it would target armed groups on Iraqi soil this is a rare case of it actually admitting to an attack.

Iraqi officials have complained in the past about Iranian artillery shelling its northern mountainous region where armed Kurdish opposition groups have taken refuge.

An explosion during a military parade in the town of Mahabad, in Iran’s northwestern Kurdish region, killed 12 women and children on Wednesday.

Iran has already blamed the attack on Kurdish separatists who have fought Iranian forces in the area for years, but most Kurdish groups condemned the attack and no one has so far claimed responsibility for it.

Iran has also blamed Israel, the U.S. and supporters of Iraq’s previous regime for supporting the Kurdish groups.

The parade was one of several held around the country to mark the 30th anniversary of the start of the Iran-Iraq war.

The city of Mahabad is home to 190,000 people — most of them Kurds and Sunni Muslims. Iran is predominantly Shiite.

Government forces in Iraq, Iran and Turkey have all periodically battled with the Kurdish minorities straddling their borders. They fear the groups are seeking to unite territory in all three nations to form an independent Kurdish homeland.

The most active rebellion is in southeastern Turkey, where the Kurdistan Workers Party, or PKK, has fought for greater autonomy and civil rights since 1984 in a battle that has killed tens of thousands of people. They have sometimes operated from bases across the border in northern Iraq’s semi-autonomous Kurdish region, sparking a large-scale cross-border Turkish military campaign in February 2008 that involved airstrikes and ground troops.

The group in Iran is a wing of the PKK and also sometimes operates inside friendly territory in Iraqi Kurdistan. Like Turkey, Iran’s military has attacked their bases on the other side of the border with occasional artillery strikes.

Inside Iran, their fight has mostly involved occasional roadside bombs and other attacks targeting security forces. Iranian authorities also linked the rebels to a terrorist cell whose members were arrested last month on suspicion of plotting to assassinate officials.