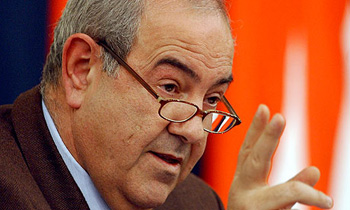 Ayad Allawi, who won the most votes in Iraq’s general election eight months ago, has for the first time indicated he will take his bloc into opposition and walk away from western-backed efforts to form a power-sharing government that would free the country from a crippling political crisis.

“I have come to accept that opposition is a real option for us,” Allawi said in an interview with the Guardian. “We are in the final days of making a final decision on this issue.”

Until recently, Allawi had been clinging to hopes that a compromise would be reached between his bloc, known as Iraqiya, and the coalition of the prime minister, Nouri al-Maliki, whom Allawi’s bloc narrowly edged by 91 seats to 89 in the 7 March election.

However, interminable rounds of shuttle diplomacy, mostly conducted in neighbouring capitals, appear to have convinced him that a US-backed power-sharing government is not viable.

“We are not ready to be a false witness to history by signing up to something that we don’t believe can work,” Allawi said, in reference to a mooted plan to create for him an office with executive powers equal to those of the prime minister.

The plan had been a key plank of US diplomatic efforts over the summer, but has been subsumed by regional manoeuvrings in which Iran, the US, Saudi Arabia and Turkey have competed heavily for influence in postwar Iraq.

Maliki made a high-profile visit to Tehran last month, during which he referred to Iran as Iraq’s leading ally. Iranian efforts were instrumental in getting a key bloc of Shia Islamists, the Sadrist movement, to endorse Maliki, despite years of enmity between him and their exiled leader, Muqtadr al-Sadr.

The Sadrist move has enhanced Maliki’s chances of being returned as leader and made a solution for Allawi all the more difficult. It also appears to suggest that Iraq is shifting from a western sphere of influence to direct Iranian tutelage as the seven-year war winds down.

“Our rights and the will of the Iraqi people are being ignored and the fact that Iraqiya has the most seats is being ignored,” Allawi said. “There are no discussions about power-sharing, or devolution of power.

“The Iranian influence is the biggest factor in this country and we believe it is damaging to the country and in the future for the two peoples of Iraq and Iran, let alone creating tensions for the greater [situation] in the Middle East.”

A US diplomatic rearguard effort now appears to have swung heavily behind Iraq’s vice-president, Adil Abdul Mehdi, who is also a Shia Islamist but is considered pro-western in outlook.

Abdul Mehdi suggested to the Guardian that Iraq was a finely balanced ship, and conceded that regional states were heavily involved in attempts to form a government that reflects their own interests.

“We hope [Iraq] will not shift too far to one side,” he said. “Ever since the first Gulf war, Iraq has been regionalised in a sense. All leaders are going to neighbouring countries to explain themselves. But it’s making a mistake to have things dictated to us.”

Abdul Mehdi and the Islamic Supreme Council of Iraq, which he represents in parliament, have formed a notional alliance with Allawi’s Iraqiya and several minor parties that does not command half of the 325 seats in the new parliament – a benchmark needed to make a claim on forming a government.

“They should be given the rights they deserve from being elected,” he said of Iraqiya.

If Allawi does take his party into opposition, it will be the first time any bloc has done so after an election in post-Saddam Iraq. Both he and the Sadrists left Maliki’s last government in 2007 and notionally were in opposition. However, the move was more of a boycott and not seen as a counterweight to government.

Iraq’s Kurds command 59 seats and will play a pivotal role in any new government. “The Kurds are the kingmakers now,” Abdul Mehdi said. “If any of us try to hurdle the process they will be prevented by the other three.”

The result of Iraq’s general election on 7 March was inconclusive, with Ayad Allawi’s coalition claiming 91 seats, compared to the 89 seats won by Nouri al-Maliki’s coalition. Neither were ever going to secure half of the 325 seats in Iraq’s expanded parliament.

Forming a government is especially difficult because most parties represent sects with disparate interests and little common ground, and the inevitable horse-trading to build a ruling bloc dragged on for almost eight months.

Maliki’s bloc is comprised largely of Shia Islamists. Allawi’s coalition is secular in character and its supporters come mainly from the Sunni heartland that was disenfranchised by the fall of Saddam.

Whoever ends up governing will need the support of the Kurds, who control 59 seats and loom as kingmakers in any future deal.

Complicating things further are the not so hidden hands of Iraq’s neighbours, who play a decisive hand in the brittle state’s internal affairs. Iran supports Maliki; Saudi Arabia, Egypt and Turkey are backing Allawi; and the US is somewhere between the two.

Iran president complains of outside interference in region

U.N. nuclear watchdog says it will work for Iran deal

Reuters: The U.N. nuclear watchdog said on Tuesday it...