AFP: The United States urged Iran to halt the reportedly imminent execution of a mother-of-two for adultery, saying the case showed a fundamental disregard by the regime for human rights. 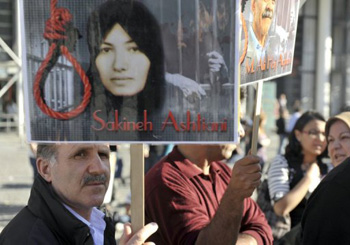 WASHINGTON (AFP) — The United States urged Iran to halt the reportedly imminent execution of a mother-of-two for adultery, saying the case showed a fundamental disregard by the regime for human rights.

“We condemn in the strongest terms the government of Iran’s apparent plans to move forward in executing Ms. Sakineh Mohammadi-Ashtiani,” a White House statement said.

“We call on the government of Iran to stop this execution, and provide Ms. Ashtiani with the due process and fair treatment she deserves,” it said.

In a separate statement, Secretary of State Hillary Clinton said that Iran’s leaders “have failed once again to protect the fundamental rights of their own citizens, particularly women.”

“Ms. Ashtiani’s case has not proceeded with the transparency and due process guaranteed under Iranian law, and we are concerned about reports of coerced confessions and other mistreatment,” Clinton said.

“The United States joins the international community in calling for Iran to immediately halt any plans for Ms. Ashtiani’s execution and to handle her case with utmost transparency,” she said.

A French human rights group and exiled Iranian activist Mina Ahadi have voiced fear that Ashtiani could be executed as early as Wednesday.

The case drew an international outcry after it emerged she would be stoned to death.

Since July, Iran has repeatedly said that the stoning sentence has been stayed pending a final decision and it was unclear how any execution would be carried out.

The United States is the only major Western nation to practice the death penalty but has said in response to Ashtiani’s case that it does not believe adultery should be a capital offense.

The Iranian Resistance calls on the U.S. government, UNAMI...