AFP: Iraq’s foreign minister said on Wednesday his country welcomed a Saudi proposal to host talks for resolving a deadlock over forming a government, nearly eight months after polls. 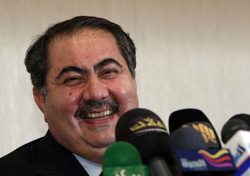 “It is a good initiative and we welcome it because it comes to serve the people,” Hoshyar Zebari told a news conference in Iraq’s first official reaction to the proposal.
He added, however, that “we are surprised because we did not receive any official notification, and heard about it through the media.”

Iraq has been without a new government since a March 7 election in which the Sunni-backed Iraqiya bloc led by former premier Iyad Allawi won 91 seats, followed by incumbent Prime Minister Nuri al-Maliki’s State of Law with 89.

Despite intense back-room negotiations, neither side has been able to muster the 163 seats required for a majority in Iraq’s 325-member parliament.

Late last month, Saudi Arabia’s King Abdullah invited Iraq’s political leaders to meet in Riyadh after the mid-November Eid al-Adha holiday to bridge their differences and agree on a government.

Saudi Foreign Minister Prince Saud al-Faisal had said Iraqi political leaders had signalled support for the Saudi proposal, but there was no immediate official reaction from Iraq.

Prince Saud told reporters that Riyadh and Arab League sponsors of talks in the Saudi capital would only serve as facilitators.

“Saudi Arabia is not going to be an observer or take any part,” he said.

He added that there were no preconditions and no time-limit was being set for the discussions, and that Saudi Arabia “will support any solution reached by the parties.”

Asked whether Iran, Riyadh’s rival for influence in Iraq, would be welcome as an observer or participant, Saud replied: “There is no intention for any international presence in these meetings; (they) are only for the Iraqis.”

Sunni-dominated Saudi Arabia has backed Allawi against the Shiite Maliki, whom they had long seen as too close to majority-Shiite Iran.

But Riyadh and other regional governments have grown concerned at the impasse and the effect it could have on Iraq’s overall stability in the wake of the scheduled withdrawal of US troops at the end of next year.

In Baghdad, an MP close to Maliki, who is seeking to keep his job, had scorned the invitation shortly after it was made.

“This Saudi initiative is not positive, and that country does not have a role to play because it has not been neutral in recent years; it has always had a negative attitude” toward Maliki, Sami al-Askari said.