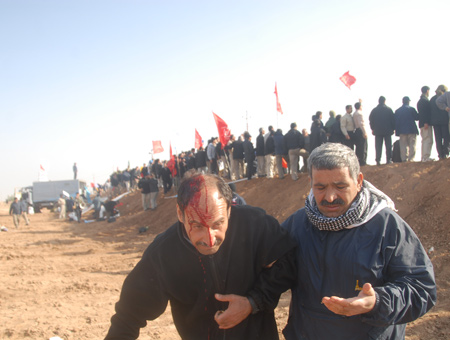 “Large numbers of terrorist agents, backed by Iraqi special armed forces under the command of Prime Minister Nuri al-Maliki in military humvees, attempted to forcibly enter the camp, as residents peacefully protested. At least 100 residents, including 50 women, were injured as attackers hurled stones, sharp objects, planks of wood and metal”, the British Parliamentary Committee for Iran Freedom said in a statement.

Committee chairman Lord Corbett of Castle Vale warned of an “imminent humanitarian tragedy” at the refugee camp without immediate intervention by US forces and the UN Assistance Mission for Iraq. “This is Tehran’s response to growing domestic unrest and nationwide calls for regime change”, he said.

Spain’s central court on 27 December 2010 summoned the Chief of Police of Iraq’s Diyala Province for prosecution for ‘war crimes’ and ‘crimes against humanity’ at Ashraf in July 2009, when 11 residents were killed and hundreds injured in a raid of the camp. The camp houses some 3,400 members of the main Iranian opposition group People’s Mojahedin Organisation of Iran (PMOI).

“The British Parliamentary Committee for Iran Freedom calls on US forces in Iraq and UNAMI to intervene immediately to prevent bloodshed at the camp. US forces should urgently take over protection of the residents while the UN stations a permanent monitoring team at the camp to prevent further assaults, remove the 180 loudspeakers and end the siege of Ashraf”, the statement said.

Iran’s foreign minister Ali Akbar Salehi on 5 January met Prime Minister al-Maliki in Baghdad and confirmed that the talks focused on the PMOI in the camp.

The BPCIF statement pointed out that Ashraf residents were recognised by US forces as “protected persons” under the Fourth Geneva Convention, and the Spanish court ruling reiterated the residents’ status.