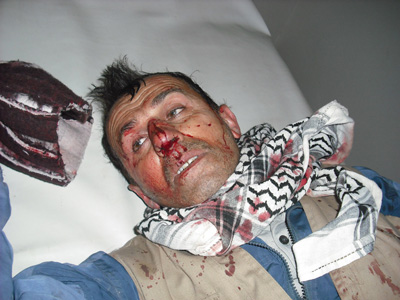 At 4.45 am (local time), some 2,500 Iraqi armed forces moved into Camp Ashraf with armoured vehicles firing indiscriminately into unarmed residents, according to the opposition coalition National Council of Resistance of Iran, which is based in Paris. Camp Ashraf residents are members of the People’s Mojahedin Organisation of Iran (PMOI) which is the main group within the NCRI.

Amnesty International said in a statement the Iraqi authorities must immediately launch an independent investigation into reports that Iraqi troops killed and injured camp residents in an unprovoked attack.

“Video clips of the clashes that the PMOI has uploaded to YouTube appear to show Iraqi soldiers firing indiscriminately into the crowds and using vehicles to try and run others down”, Amnesty said.

The United Kingdom said it was “deeply disturbed” by reports that a number of civilian residents had been killed and many more wounded at Camp Ashraf today.

U.S. Secretary of Defence Robert Gates, who was in Iraq on Friday, said: “We’re very concerned with reports of deaths and injuries resulting from this morning’s clashes … I urge the Iraqi government to show restraint and to live up to its commitments to treat residents of Ashraf according to Iraqi law and their international obligations”.

US State Department spokesman Mark C. Toner said, “this crisis and the loss of life was initiated by the Government of Iraq and the Iraqi military”, and he urged Iraqi officials to “avoid violence and show restraint”.

The NCRI said that among the 32 killed were 7 women, and it provided their photographs. It said the attack was ordered by Iraqi Prime Minister Nuri al-Maliki at the behest of the Iranian government.

The attacked seemed to be premeditated as the PMOI had protested the build-up of armoured units at the refugee camp since Saturday. Maryam Rajavi, head of the NCRI, wrote late Thursday to US Secretary of State Hillary Clinton and the United Nations requesting their intervention to prevent a “bloodbath”.

A Spanish court on 27 December 2010 summoned the Chief of Police of Iraq’s Diyala Province for prosecution for ‘war crimes’ and ‘crimes against humanity’ at Ashraf in July 2009, when 11 residents were killed and hundreds injured in a raid of the camp.

Washington Times: My e-mail fills up daily with dozens...