International Herald Tribune: Members of a blacklisted Iranian dissident group were joined by former U.S. officials on Wednesday in calling on the United States to protect them after a raid on their camp by Iraqi government forces last week that the dissidents say left 34 people dead and 318 people wounded. 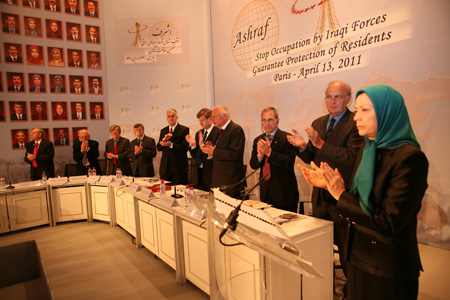 PARIS — Members of a blacklisted Iranian dissident group were joined by former U.S. officials on Wednesday in calling on the United States to protect them after a raid on their camp by Iraqi government forces last week that the dissidents say left 34 people dead and 318 people wounded.

“The massacre in Ashraf plainly puts into perspective the conclusion that the prudent and, in fact, the only solution is for the U.S. to reassume the camp’s protection,” Maryam Rajavi, a leader of the dissidents, said at a news conference.

Details of the incident at Camp Ashraf, which houses members of the People’s Mujahedeen Organization of Iran, remain somewhat obscure. Enough is known that officials from the United States and European Union, as well as human rights groups, have urged the government of Prime Minister Nuri Kamal al-Maliki to show restraint.

Sean McCormack, a U.S. State Department spokesman, said Wednesday that Washington had called on the Iraqi government to conduct an investigation and to guarantee the humane treatment of the residents of the camp.

The group’s members say that despite their having warned U.S. and U.N. officials that an attack was imminent, Iraqi Army soldiers equipped with armored vehicles and Humvees began an assault on the 3,400 people living in the camp, north of Baghdad, at 4:45 a.m. Friday.

The Iraqi Defense Ministry said Tuesday that it would investigate the claim that 34 people had died in the raid, Reuters reported. The authorities have said that three people were killed resisting an operation to return land from the camp to farmers.

On Monday, a spokesman for the Iraqi government said the Iranians would have to leave Iraq by the end of the year.

A video shown at the news conference, filmed and edited by members of the group, showed soldiers in desert camouflage uniforms firing on unarmed civilians and armored vehicles and trucks being used to herd crowds of people, running some down. The authenticity of the video could not immediately be verified.

Ms. Rajavi, an Iranian exile who describes herself as the president-elect of the country’s resistance, cited the example of a notorious July 1995 massacre of the Yugoslavian war, saying: “With the threat of another Srebrenica looming in Ashraf, intervention is absolutely essential.”

The people of Camp Ashraf were disarmed by U.S. forces in 2009, agreeing to lay down their weapons and renounce violence in return for U.S. protection.

The Iranian group has been branded a terrorist group by the United States, Iraq and Iran, though not the European Union or the United Nations. The dissidents claim that Mr. Maliki’s government is making use of the terrorist designation to justify the attacks, all the while carrying out the bidding of the Iranian government, which sees them as a threat to its hold on power. All the speakers at the news conference called on Washington to remove the terrorist label.

Two of them, Hugh Shelton, former chairman of the U.S. Joint Chiefs of Staff, and John R. Bolton, U.S. ambassador to the United Nations under President George W. Bush, praised the group as having provided the United States with valuable intelligence about Iran.

Reuters: Nigeria has reported the seizure of an illegal...

New Iran FM spokesman to be appointed in coming days