Daily Telegraph: The story of my daughter’s murder needs to be heard by the families of British and US troops, writes Reza Haftbaradaran.

The story of my daughter’s murder needs to be heard by the families of British and US troops, writes Reza Haftbaradaran. 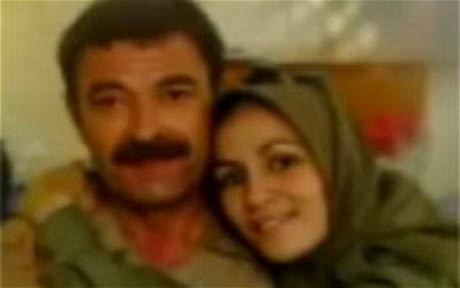 My daughter Saba’s life ended at 5:30 in the morning on 9 April 2011 at the age of 29. The story leading to the worst day of my life is one which must be heard by the families of British and US troops, whose many loved ones gave their lives on Iraqi soil.

Saba was born in 1981 in an Iranian prison. As a child she spent many days in prison alongside her mother and I who had been jailed for demanding freedom. She would sleep and wake to the sound of screams from the political prisoners being tortured. When we finally escaped Iran we set up home at Camp Ashraf, a refugee camp in Iraq, home to 3,400 Iranian dissidents, members of the PMOI, forced from their homes for opposing the Iranian regime. Saba who had been born in prison and left prison at the age of two was some years later sent abroad to Germany where she and her sister could live and study. However, the sound of torture from Saba’s childhood never left her and at the age of 19 she decided to come to Ashraf to struggle with us for freedom and democracy in Iran.

On 8 April 2011, in the middle of the night, 2,500 Iraqi soldiers forced entry to Ashraf and began shooting at its unarmed residents, as well as driving at them in Humvees. As I saw the slaughter of my friends and colleagues happening before me, my thoughts immediately turned to finding Saba. As I searched amongst the hundreds of wounded, I was told by a doctor that she had been shot and taken to hospital. Only when I arrived there did I realize the extent of her injuries. She had been shot in the thigh, breaking the bone and tearing her main artery. She was, though, awake and could speak to me and I knew immediately that with the necessary treatment her life could easily be saved. It soon became clear that Iraqi Prime Minister Nuri Al-Maliki, who had ordered the massacre, had no intention of allowing victims to live.

Medical restrictions placed on Ashraf and the resultant lack of facilities meant Saba needed to be taken to Baquba hospital immediately, only a two kilometre journey away. That five minute journey took us two hours. The Iraqi military stopped us seven times. As I screamed that my daughter would die if they did not speed up the journey, one of the soldiers whispered to his colleague “that is exactly what we want”. As I heard those chilling words I knew that this journey was a tunnel of torture from which my daughter would never return home.

The deliberate and deadly delays continued at Baquba hospital where I was told by doctors that Saba needed to be transferred to Baghdad for the required operation. I was then approached by an Iraqi officer who told me that if I rejected my ideals of democracy in Iran and denounced the PMOI he would get Saba to the best hospitals in Europe. The attempted blackmail was brutal and sickening. The ideals of democracy and freedom in Iran were the very ideals for which my daughter stood and for which she had returned to Ashraf. They are also the ideals for which young British and American troops laid down their lives in Iraq, a land where those basic freedoms were also horribly absent. Saba would not want me to strike that deal.

Saba’s pain ended the next day when she died from internal bleeding. The horrifying experience that Saba and I endured at the hands of the Iraqi officers and hospitals showed me that Al-Maliki and his officers have a systematic and open plan to deny life saving medical help at the behest of their allies in the Iranian regime. This plan is clearly still in operation as, tragically, a month later, Saba’s friends at Ashraf continue to suffer as their gunshot wounds remain untreated.

To the family members of those brave British and US soldiers who have died in Iraq I wish to send a message of solidarity. British and US troops died on Iraqi soil to provide the people of Iraq (including Saba) with the privilege of democracy and the rule of law. They did not shed their blood to allow such breaches to continue. Sadly, through its silence, the UK Foreign Office is currently dishonouring those memories and undermining that work by allowing Nuri Al-Maliki to massacre and kill Iranians on Iraqi soil, Iranians whose sole aim is to bring to their homeland that which was fought for in Iraq.

I urge the British government to act now to help those at Ashraf by applying for a United Nations force to take over protection at Camp Ashraf. Saba’s death and those of British and US troops must not be in vain.

Reza Haftbaradaran is an Iranian film maker and film director and former political prisoner in Iran. He is currently living in Camp Ashraf in the Diyala province in Iraq.

AFP: Iran has given jail terms of six years...