AP: A young Kurdish shepherd was killed Saturday by an Iranian sniper, local officials said Saturday amid concern about a spike in violence along the Iraq-Iran border. 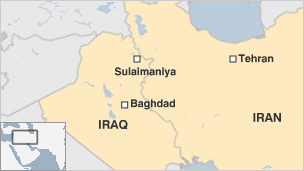 SULAIMANIYAH, Iraq (AP) — A young Kurdish shepherd was killed Saturday by an Iranian sniper, local officials said Saturday amid concern about a spike in violence along the Iraq-Iran border.

Both Iranian and Turkish forces have increased shelling and airstrikes this summer against Kurdish rebels with bases in Iraq who for years have battled for autonomy in Iran and Turkey.

The shepherd was killed early in the morning, said Maghdeed Ahmed, the mayor of Haj Omran, a town in northern Iraq’s self-ruled Kurdish region.

The mayor of a nearby village of Choman, Abdul-Wahid Gwani, confirmed the death.

Iran also shelled the border, Ahmed said. The shelling appeared to target bases of the Iranian Kurdish rebel group PEJAK, which has been involved in sporadic cross-border clashes with Iranian forces in recent years. PEJAK says it’s fighting for greater rights in Iran.

Tehran maintains it has the right to attack PEJAK’s bases in Iraq and has accused residents of Iraq’s Kurdish north of providing a safe haven for the rebels. Iraqi Kurds control three provinces in northern Iraq that make up their autonomous region.

Along the Turkish border, Kurdish rebels from the Turkish Kurdistan Workers’ Party, or PKK, have battled Turkey for years. Turkey has recently carried out a barrage of airstrikes on the Iraqi border against the PKK, who use northern Iraq as a base for hit-and-run attacks on Turkish targets.

The New York-based Human Rights Watch said Friday that Iran’s and Turkey’s cross-border attacks have killed at least 10 civilians and displaced hundreds since mid-July. The casualty figure did not include the shepherd who died later.

The organization called on both Turkey and Iran to protect civilians and specifically criticized Iran, suggesting that the shelling may be an attempt to push some Iraqi civilians out of the border area.

“Iran and Turkey should do all they can to protect civilians and their property from harm, no matter what the reason for their attacks in Iraqi Kurdistan,” said Joe Stork, from Human Rights Watch.

An umbrella group that represents all Kurdish rebels announced Saturday that the PKK is officially joining forces with PEJAK against the Iranian offensive. The two groups share similar aims and have worked together in the past but this announcement marks a noticeable increase in their cooperation.

“Orders were issued that PKK fighters to support the PEJAK in resisting any attack on their areas,” said Dazdar Hama, a media official for the Kurdish group.

GCC does not oppose referring Iran to Security Council: chief

Xinhua: Chief of the Gulf Cooperation Council (GCC), which...

By Jubin Katiraie As the social situation in Iran becomes...