Reuters: The European Union urged Iraq on Tuesday to allow time for the United Nations to determine the status of residents of a camp of Iranian dissidents that Baghdad has threatened to deport by the year-end. 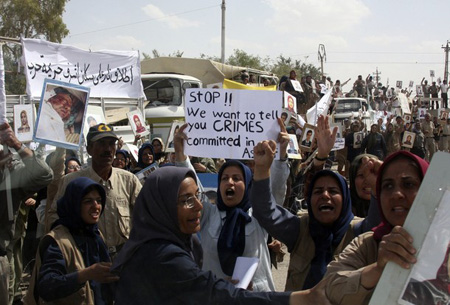 BRUSSELS, Nov 22 (Reuters) – The European Union urged Iraq on Tuesday to allow time for the United Nations to determine the status of residents of a camp of Iranian dissidents that Baghdad has threatened to deport by the year-end.

The United Nations High Commissioner for Refugees (UNHCR) has been trying to arrange to interview the 3,400 residents of Camp Ashraf to see which of them qualifies for refugee status to permit their resettlement, but Iraq has not allowed this.

Members of the European Parliament called on EU foreign policy chief Catherine Ashton to step up pressure on Iraq to extend the year-end deadline it has set for the closure of the camp to allow the interview process to take place.

“The moment of truth is coming in this very difficult problem,” said Jean De Ruyt, a senior Belgian diplomat appointed by Ashton to work with the United Nations, Iraq and others to resolve the issue.

“Obviously the closure of the camp without a process of UNHCR to identify and organise the refugee status determination would bring a deadlock,” he said. “I hope that the Iraqi government will soon accept that this (process) takes place.”

De Ruyt said that if Iraq would not allow the interview process to take place at Ashraf itself, it was important that the residents were not “put in isolation or in jail”.

“To be sure that this process is organised in an orderly way the U.N. has to give some monitoring, has to reinforce its presence close to them,” he said.

De Ruyt told Reuters the European Union had “insisted very much” to Baghdad that the deadline for closure of Ashraf should be extended, but added, “Probably this will remain a red line for the Iraqis”.

Ashraf, some 65 km (40 miles) from Baghdad, is the base of the People’s Mujahideen Organisation of Iran (PMOI), which mounted attacks on Iran before the U.S.-led removal of Iraqi leader Saddam Hussein in 2003.

The future of its residents became uncertain in 2009 after the United States, which lists the PMOI as a terrorist organisation, turned the camp over to the Iraqi government, which considers its residents a threat to security.

Rights group Amnesty International says they are subject to harassment by the Iraqi government and denied access to basic medicine. More than 30 residents were killed in a clash with Iraqi security forces in April.

Iraqi embassy counsellor Jwan Khioka told the European Parliament meeting that Iraq would stick to its plans to evacuate the camp, “and will transfer its residents to other camps in Iraq in preparation to deport them out of Iraq”.

Struan Stevenson, head of the European Parliament’s Iraq delegation, said that the only place the residents could be deported to was Iran and added: “There is no question they would then face certain torture and execution.”

Esther de Lange, a Dutch member of the European Parliament and vice president of its delegation on Iraq relations, said it was time for the European Union, which removed the PMOI from its terrorism list in 2009, to put pressure on Iraq.

She said the EU could exert considerable leverage as Iraq’s biggest development aid donor and a major trading partner.

“Please let us be a bit pro-active,” she told De Ruyt. “We should at least be working to extend this deadline.”

An adviser to the Iraqi government said this month Baghdad may extend the deadline — if a quick solution is found to resolve the issue of where the Ashraf residents should go.

De Ruyt said there had to be a U.N. process to determine the status of the residents first.

“For the moment nobody will welcome them because they are considered as a group which some countries consider as a terrorist group,” he said. “Only individual identification can bring a solution for the relocation of these people.” (Reporting by David Brunnstrom)

Reuters: The Senate showed strong support over the weekend...