Reuters: U.N. Secretary-General Ban Ki-moon has urged nations to accept residents of a camp of Iranian dissidents in Iraq that Baghdad has vowed to close by the end of the year, according to a report released on Monday. 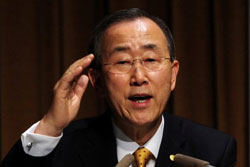 UNITED NATIONS, Dec 5 (Reuters) – U.N. Secretary-General Ban Ki-moon has urged nations to accept residents of a camp of Iranian dissidents in Iraq that Baghdad has vowed to close by the end of the year, according to a report released on Monday.

“In order to find a durable solution for the camp residents, it is essential that potential third countries indicate their willingness to receive them for resettlement,” Ban said in his latest report to the Security Council on the U.N. Assistance Mission for Iraq (UNAMI).

Ban said he and other senior U.N. officials “have been encouraging member states in this regard.” The U.N. Security Council will review Ban’s report at a meeting on Tuesday.

Last month, European Union foreign policy chief Catherine Ashton said she would urge EU member states to accept residents of Camp Ashraf, a base of the People’s Mujahideen Organization of Iran, which mounted attacks on Iran before the U.S.-led removal of Iraqi leader Saddam Hussein in 2003. [ID:nL5E7MO4CF]

The future of Ashraf’s more than 3,000 residents became uncertain in 2009 after the United States turned the camp over to the Iraqi government, which considers its residents a threat to security.

Amnesty International says the Iranians there are subject to harassment by the government and denied access to basic medicine. More than 30 were killed in a clash with Iraqi security forces in April.

“The United Nations continues to advocate that the humanitarian needs of the residents be met,” Ban said.

The United Nations High Commissioner for Refugees has been trying to arrange to interview the camp’s residents to determine who among them qualifies for refugee status and resettlement but Iraq has yet to allow this.

“The government of Iraq’s approval would be vital in moving this process forward,” Ban’s report said. “The support of the leadership of Camp Ashraf for U.N. efforts in this regard is also necessary.”

The EU removed the People’s Mujahideen Organization of Iran from its terrorism list in 2009 but it is still considered a terrorist organization by some countries, including the United States and Iran.

Last month, members of the European Parliament called on Ashton to step up pressure on Iraq to extend the deadline for closing the camp. British MEP Struan Stevenson said residents would face “certain torture and execution” if sent back to Iran. (Editing by John O’Callaghan)