CNN: Several prominent Americans joined Iranian opposition activists Monday in a noisy demonstration outside the White House, urging President Obama to discuss what may soon happen at a refugee camp as the United States leaves Iraq. 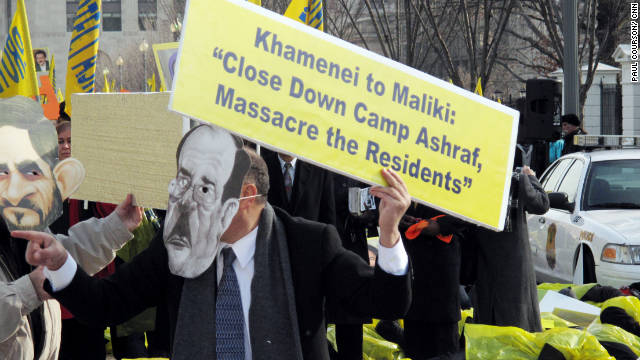 The Iraqi government plans to close Camp Ashraf northeast of Baghdad at the end of December, without clear assurances the refugees will be protected against attacks by Iraqi forces and reprisals from neighboring Iran.

The camp is home to more than 3,000 people described as Iranian resistance figures and their sympathizers. The group, known as MEK or the People’s Mujahidin of Iran, has been designated by the United States as a terrorist organization. Some GOP lawmakers are calling on the Obama administration to lift that designation and officials say that is under review.

Among those leading the rally was former U.S. Sen. Robert Torricelli, a Democrat from New Jersey.

“When President Obama welcomed Mr. Maliki to the White House he may have noticed something,” Torricelli told the crowd. “When he took his hand back, there was blood on it.”

Torricelli said, “That is the blood of the innocent people of Camp Ashraf.” Torricelli said he believes they have been tortured and killed by Iraqi forces under the Maliki regime.

Former Homeland Security Secretary Tom Ridge followed Torricelli to offer a simple plea as the Iraqi leader met with Obama, “to insist that the Maliki government extend the deadline, to ensure the protection of the 3,400 residents of Camp Ashraf.”

The group believes the current regime in Iraq, under orders from al-Maliki, has twice staged deadly attacks that have killed nearly 50 people. When word of such an attack in April came out, it was described as a “massacre” by the chairman of the U.S. Senate Foreign Relations Committee, Sen. John Kerry, D-Massachusetts.

Since 2004, the United States has considered the residents of Camp Ashraf “noncombatants” and “protected persons” under the Geneva Conventions. A United Nations commission on refugees has described those at Camp Ashraf as “formal asylum seekers” against persecution by the regime in Iran.

U.S. forces have handed security of Camp Ashraf to the Iraqi government as American forces depart.

Those at the rally outside the White House on Monday suggested Iran is hoping al-Maliki and Iraq will expose thousands of people opposed to the government in Tehran by closing the camp and not providing safeguards.

Some called for a United Nations-led force of “blue helmets” to provide security for those living at the camp.

In Iran, 3 degrees of separation from truth