AFP: European states should agree to accept members of an exiled Iranian group whose base in Iraq is being threatened with closure at year-end, the United Nations’s special envoy to Baghdad said on Monday. 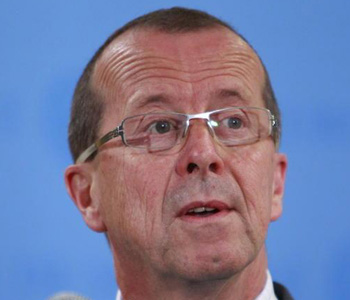 BAGHDAD, December 12, 2011 (AFP) – European states should agree to accept members of an exiled Iranian group whose base in Iraq is being threatened with closure at year-end, the United Nations’s special envoy to Baghdad said on Monday.

Martin Kobler also called for the Iraqi government to extend the date of the closure of Camp Ashraf, which has been home to several thousand members of the People’s Mujahedeen Organisation of Iran (PMOI) since the 1980s.

“I appeal to the governments of all UN member states, however in particular to the Europeans, to take Camp Ashraf residents into their countries,” Kobler told AFP following a ceremony to mark International Human Rights Day, which was on December 10.

Kobler said that in addition to “nationals of European countries (living) in Camp Ashraf,” there were around 900 people claiming to have documents relating them in some way to European nationals.

“I hope they will … because there is a danger of confrontation and violence,” he added.

Camp Ashraf, which has become a mounting international problem, has been in the spotlight since a deadly April raid on the camp by Iraqi security forces.

The camp was set up when Iraq and Iran were at war in the 1980s by the PMOI and later came under US control until January 2009, when US forces transferred security for the camp to Iraq.

The PMOI has been on the US government terrorist list since 1997.

Kobler also called for Iraqi authorities to extend what is currently a year-end deadline for the camp’s closure, arguing that “we will not be able to move several thousand people by the end of the year.”

Iran sets up new base near disputed islands