AFP: Searches of Iranian opposition members have delayed their departure from a camp in Iraq for a UN-approved site near Baghdad, an Iraqi army officer and a legal adviser to the exiles said on Friday. 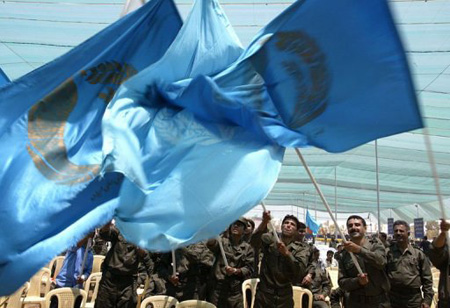 BAGHDAD (AFP)— Searches of Iranian opposition members have delayed their departure from a camp in Iraq for a UN-approved site near Baghdad, an Iraqi army officer and a legal adviser to the exiles said on Friday.

A group of some 400 Iranians opposed to the regime in Tehran was to depart on Friday from Camp Ashraf, north of Baghdad, for a new location called Camp Liberty, as part of a process that aims to see them resettled outside Iraq.

The planned move is part of a December 25 deal between the UN and Iraq, which was reached after extensive talks, under which around 3,400 members of the opposition People’s Mujahedeen Organisation of Iran (PMOI) are to leave Camp Ashraf, which the Iraqi government has said will be closed in April.

“Four hundred is a big number, and we are still searching them and their belongings,” an Iraqi army major told AFP by telephone on Friday evening.

“We are also calling for backup for security reasons because we are worried about moving them from Diyala (province) to Baghdad with a small number of soldiers,” the major said.

It was not clear when they would depart the camp.

“They search all the bags, every single item,” said Saffari, who arrived in Ashraf ahead of the US-led invasion of 2003 and is to travel with the group to Camp Liberty, near Baghdad airport.

He said that Iraqi forces had raised objections to items including cameras and cooking knives, making for a lengthy process.

“It shows that they just want to be difficult,” Saffari said. “It’s been a long wait.”

Now-executed dictator Saddam Hussein allowed the PMOI to set up Camp Ashraf during his 1980-88 war with Iran.

The left-wing PMOI was founded in 1960s to oppose the shah of Iran, but took up arms against Iran’s new clerical rulers after the Islamic revolution of 1979.

According to the US State Department, which has blacklisted the PMOI as a terrorist organisation since 1997, members of the group have carried out a large number of attacks against Iranian targets, and also against Americans.

The PMOI announced in 2001 that it had renounced violence, and is seeking to have the terrorist designation lifted.

Iraq militias may be preparing to step up attacks