BBC: Tens of thousands of Iraqis have joined demonstrations against Prime Minister Nouri al-Maliki, a Shia, in the mainly Sunni province of Anbar. BBC 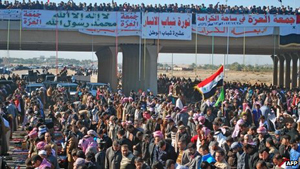 Tens of thousands of Iraqis have joined demonstrations against Prime Minister Nouri al-Maliki, a Shia, in the mainly Sunni province of Anbar.

Angry Sunnis took to the streets after Friday prayers in Falluja and Ramadi, chanting slogans against Mr Maliki.

Protests have intensified since the arrests last week of bodyguards of the Sunni Finance Minister Rafie al-Issawi.

Mr Maliki insisted that he did not order last Thursday’s arrests and suggested that they were the result of an investigation undertaken by the judiciary.

During Friday’s protest in Ramadi a mock funeral was held for the Iraqi judiciary.
Illegal raids?

Some journalists attempting to reach the city were held at an army checkpoint some 50km east of Ramadi for six hours, and were unable to cover the demonstration, says the BBC’s Rami Ruhayem who was at the scene.
Rafie al-Issawi (file) Rafie al-Issawi accused the prime minister of being a man “who does not respect the law”

The government has succeeded in keeping the protests out of the public eye to an extent, says our correspondent, but in the process has revealed how nervous it is over this latest challenge to its authority.

Mr Issawi, a prominent member of the al-Iraqiyya political bloc, denounced the arrests last Thursday as a “deliberate and premeditated act” by Mr Maliki.

He said militia forces had raided his office and home and the finance ministry.

He accused the prime minister of being a man “who does not believe in partnership and does not respect the law and the constitution”.

The head of the minister’s protection force had been arrested on the strength of “confessions” and had admitted taking part in terrorist attacks, Mr Bayrkdar said.

The raids occurred hours after President Jalal Talabani, a Kurd who has often mediated between Sunni and Shia politicians, was flown to Germany for treatment after suffering a stroke.

Mr Issawi has reportedly taken refuge in the residence of Parliament Speaker Osama al-Nujaifi, and called for a parliamentary vote of no-confidence against Mr Maliki.

Mr Issawi reportedly worked as a doctor in Falluja when Sunni insurgents fought US troops for control of the city in 2004.

The former US commander in Iraq, Gen Ray Odierno, later told Mr Maliki that he had looked into allegations that Mr Issawi was co-operating with the insurgents and found them to be baseless.

Mr Hashemi denied the charges but fled to the semi-autonomous Kurdish region in northern Iraq before moving to Turkey. A court found him guilty in absentia and sentenced him to death in September.

AFP: Iran's supreme court has confirmed a sentence of...