Huffington Post: I have just looked at grisly photographs of the six innocent refugees and asylum-seekers massacred in Camp Liberty, West of Baghdad. The Huffington Post

By Struan Stevenson MEP , President of European Parliament’s Delegation for Relations with Iraq 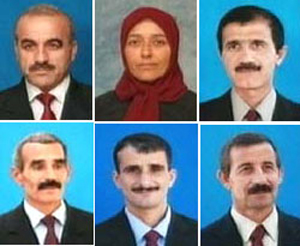 I have just looked at grisly photographs of the six innocent refugees and asylum-seekers massacred in Camp Liberty, West of Baghdad. Blown apart and incinerated while they slept, the five men and one woman were sitting ducks when 35 missiles and mortars rained down into their tightly-packed, prison-like compound at 05.45 am on 9 February. Over 100 other residents of the camp have been seriously injured. This was a murderous attack that was as inevitable as it was preventable.

Since the first of the Iranian opposition members of the People’s Mohajedin of Iran (PMOI) were forced to move from their home in Camp Ashraf over a year ago, I and many other parliamentarians and lawyers representing the PMOI have warned about their vulnerability to attack. We were assured by the UN Special Representative in Iraq – Martin Kobler – that there was nothing to fear; that Camp Liberty was a safe haven. His boss, UN High Commissioner Antonio Guterres assured me in two separate meetings in Geneva that these people would be interviewed individually by the UN, given refugee status and then shipped to countries of safety in a ‘revolving door’ scenario.

Based on such assurances, I persuaded the residents of Ashraf to move to Camp Liberty, despite the fact that they were insulted and abused, denied most of their belongings and crammed into a polluted and derelict compound of only half a square kilometre in size – 80 times smaller than Ashraf. However, we were assured that Liberty would only be a short-term home – a Temporary Transit Location in UN jargon – until the US and EU could find new homes for them and fly them to safety. Having crammed 3,100 people into this camp, the US and EU promptly washed their hands of the whole affair and abandoned these innocent men and women to their fate.

I was supposed to go to Baghdad on 10 February to meet with senior members of the Iraqi government. A visit to Camp Liberty was high on my agenda. The European Parliament vetoed my visit at the last minute because of the deteriorating security situation. But it can be no coincidence that the last time I visited Baghdad, in April 2011, a horrific massacre took place at Camp Ashraf only days before my arrival, when the Iraqi security forces mounted a murderous armed assault on the camp killing 45 men and women and injuring hundreds.

This event became the focus for heated meetings between me and Iraqi ministers. I even aired the protests of the European Parliament in a personal meeting with President Talebani of Iraq. But predictably, the Ashraf massacre quickly became the main argument deployed by both the UN and US as they built up pressure to close Ashraf and move all of the residents to Camp Liberty. They capitulated to threats of further violence and bloodshed at the hands of the Iraqis and their Iranian sponsors and finally signed an agreement with the government of Nouri al-Maliki, without consulting the Ashraf residents. The enforced evacuation of Ashraf began.

Now, one year later and with my intended visit to Baghdad only days away, can it be a coincidence that once again a violent assault on the PMOI has resulted in death and injury? Camp Liberty is in the middle of a vast Iraqi military complex. It cannot be reached without successfully negotiating at least five military checkpoints. How is it possible that 35 missiles could be fired with complete accuracy into the middle of Camp Liberty without the knowledge of the Iraqi military authorities? Was this the Iraqi prime minister’s way of reminding the EU that he wants rid of these people and the West had better get them relocated fast or they may all suffer the same bloody fate?

Conspiracy theories like this would not surprise me in the slightest. There is mounting concern that Iraq is once again descending into chaos and potential civil war, barely one year after the last American troops left the country. In recent weeks hundreds of thousands of Iraqis have taken to the streets in protests in six of the main Iraqi provinces, including Baghdad itself. They are outraged at what they regard as an emerging dictatorship led by prime minister Nouri al-Maliki, who many regard as a puppet of the Iranian regime. He has outraged the West by allowing the free flow of arms and military personnel from Iran to Syria through Iraqi territory, boosting the vicious Assad regime and prolonging the brutal civil war in Syria.

Maliki’s behaviour is utterly deplorable and this latest atrocity at Camp Liberty requires an immediate and robust response from the newly appointed US secretary of state, John Kerry, and from the EU high commissioner for foreign affairs Catherine Ashton and also from the UN high commissioner for refugees Antonio Guterres. Maliki needs to be told to reign in his murderers. Camp Liberty should immediately be given full refugee status by the UN so that its residents are afforded the highest possible level of protection while arrangements are made for their swift return to the slightly safer Camp Ashraf and their rapid relocation out of Iraq to countries of safety.

The Americans pulled out a year ago stating that they had left behind a functioning democracy. In fact they left behind a basket case. Let’s hope it is not too late for peace and stability to be restored and for the innocent residents of Camp Liberty to be rescued from this camp.

Still chance for diplomacy with Iran: US spy chief

AFP: Sanctions and diplomacy still have a chance to...

Source: THE AUSTRALIAN bY: Paul MaleyMAN Haron Monis, the...