Foreign Policy: Former National Security Advisor Jim Jones said Tuesday that the former U.S. military base where a group of Iranian dissidents live is like a prison and the conditions there are worse than the U.S. facility at Guantánamo Bay, Cuba. FP.com 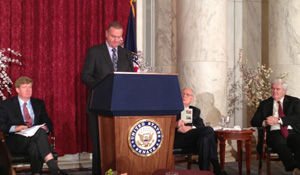 Former National Security Advisor Jim Jones said Tuesday that the former U.S. military base where a group of Iranian dissidents live is like a prison and the conditions there are worse than the U.S. facility at Guantánamo Bay, Cuba.

Jones was a keynote speaker Tuesday at a Nowrouz lunch reception hosted by the Iranian American Cultural Society of Michigan, a group that advocates on behalf of the Mujahedeen e-Khalq (MEK), an Iranian opposition group that was designated by the State Department as a foreign terrorist organization until last October. The organization is one of several Iranian-American organizations believed to be a front group for channeling MEK money to famous American lawmakers and former senior officials, according to State Department officials and congressional aides. The groups insist they are independent.

The State Department agreed to remove the MEK from its list of terrorist organizations, a designation the group earned after a terrorist attack in the 1980s that killed six Americans, because the MEK agreed to move from its secretive compound, Camp Ashraf, on the Iran-Iraq border, to Camp Liberty, a former U.S. military base near the Baghdad airport.

But the MEK has been complaining about the conditions at Camp Liberty ever since the move, along with its powerful and often paid friends in the U.S. foreign policy community.

“The facility at Camp Hurriya (Arabic for “freedom”) has become more of a prison than a camp,” said Jones, who added that the alleged terrorists imprisoned at Guantánamo “are treated far better.”

Jones criticized both the U.S. and Iraqi governments for ignoring what he called a “growing human rights debacle,” said the MEK at Camp Liberty “continue to languish in horrible conditions,” and put forth that the camp “should be more aptly named ‘Camp Shame.'”

Jones did not disclose whether he was being paid for his advocacy on behalf of the MEK.

Jones also openly criticized the Obama administration’s policy of engagement with the government of Iran and said that the Iranian regime is simply using the negotiations with the international community to buy time to build a nuclear weapon.

“We say to the so-called leaders of the Iranian regime: ‘Your days are numbered,'” he said.

The lunch event was held in the ostentatious Kennedy Caucus Room in the Senate Russell Office Building and was organized by former Congressman Patrick Kennedy, who once paraphrased his uncle President John F. Kennedy’s famous “I am a Berliner” quote by declaring, “I am an Ashrafi.”

The other speakers were former Congressman Lee Hamilton and former House Speaker Newt Gingrich, who accused Iraqi Prime Minister Nouri al-Maliki of conspiring with Iran to murder MEK members. Gingrich pointed to the attack on Camp Liberty in February that killed seven members of the group, which he said was perpetrated by the Iraqi military.

“This is a deliberate plan by Maliki to humiliate the United States and prove our irrelevance and curry favor with the Iranians,” Gingrich said.

Sen. Jeff Sessions (R-AL) popped into the event make quick remarks about Iran but didn’t say anything about Camp Liberty or the MEK. The Cable caught up with Sessions afterwards and asked him what he really thought about the MEK. Sessions said he trusted Jones on the issue.

“I believe that General Jones is correct that this has been an unfortunate mistake,” he said, referring to the conditions at Camp Liberty. “I didn’t know it was that bad. But I know it went from a good facility to a bad one.”

The lunch began with grilled eggplant, dolmeh, cherry tomatoes, olives, mint, and bread. The entrée was beef and sliced boneless chicken kabob with grilled tomatoes and rich rice with saffron. Persian pastries were served for dessert.