Reuters: Two people were killed in a mortar attack on an Iranian dissident camp in the Iraqi capital on Saturday, police sources said. 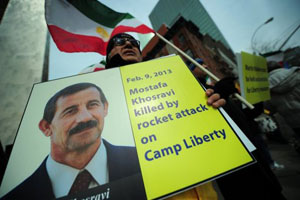 BAGHDAD (Reuters) – Two people were killed in a mortar attack on an Iranian dissident camp in the Iraqi capital on Saturday, police sources said.

The Mujahadin-e-Khalq (MEK) group said a further 40 people were wounded in the attack, which follows one in February that killed at least five of its members.

MEK, which was removed from the U.S. State Department’s official list of terrorist organizations last year, calls for the overthrow of Iran’s clerical leaders and fought on Iraq’s side during the Iran-Iraq war in the 1980s.

It is seeking to recast itself as a mainstream Iranian opposition force but is no longer welcome in Iraq under the Shi’ite-led government that came to power after U.S.-led forces invaded and toppled Saddam Hussein in 2003.

Iraqi Prime Minister Nuri al-Maliki is close to Shi’ite Iran and leans on Tehran for political support at home and in the wider Sunni-dominated region, where he has few friends.

No group immediately claimed responsibility for the attack, but an MEK spokesman said circumstantial evidence pointed to Iran, with Iraqi complicity.

“They (the Iranian regime) are the main suspect,” the spokesman said. “They have to have some cooperation from Iraqi forces and the government.”

The attack struck the group’s base in the former U.S. military compound “Camp Liberty” in western Baghdad, where most of the group was relocated by Iraqi authorities last year from a base given to them by Saddam.

“At around 11:30 a.m. around five mortar rounds landed in and near the Iranian camp in western Baghdad, killing two Iranian persons and wounding more than 17,” said a police source at Baghdad airport, which is near the camp.

The United Nations intends to process members of the group for refugee status in other countries, but they have complained that conditions at Camp Liberty are poor and that they have not been permitted to bring many personal belongings.

In a statement condemning Saturday’s attack, U.N. envoy Martin Kobler said he was “deeply concerned” by the incident, which occurred despite repeated requests to the Government of Iraq to provide Camp Liberty and its residents with protective walls and other defenses.

By Jubin Katiraie After the Iran protests in November,...

By Pooya Stone At least two people have been...