AFP: As it trundles down busy roads, the minibus packed with tourists would be unremarkable except for two things — its passengers are Westerners and the city they are in is Baghdad. Iraq is no stranger to tourism, with countless pilgrims visiting its religious shrines. By Prashant Rao 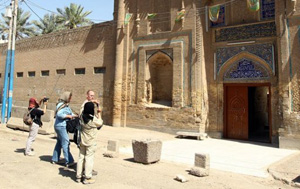 BAGHDAD (AFP) — As it trundles down busy roads, the minibus packed with tourists would be unremarkable except for two things — its passengers are Westerners and the city they are in is Baghdad.

Iraq is no stranger to tourism, with countless pilgrims visiting its religious shrines, but now the country that touts itself as the “cradle of civilisation” also wants a different kind of visitor.

Though almost entirely dependent on oil exports for government income, Iraq does play host to millions of Shiite Muslim pilgrims annually who visit its multiple shrines and holy sites, from Samarra in the north to Basra in the south.

Keen to ease a reliance on Iranian pilgrims — most of the population of its enormous eastern neighbour is Shiite — officials in Baghdad want to promote tourism from elsewhere, and believe visitor numbers can be increased threefold.

While tourists must struggle through Iraq’s decrepit infrastructure and often-frustrating bureaucracy, including a difficult-to-navigate visa system, a handful of tour operators is bringing groups to the country.

“Every area that we’ve been to has been totally, totally, different,” said Lynda Coney, one traveller on a trip organised by Britain-based Hinterland Travel.

“The Arab people, history, the archaeology… have absolutely grabbed me with interest,” the Briton told AFP while trudging through Baghdad’s main railway station.

Since 2009, Hinterland has been taking visitors on tours of Iraq lasting nine and 16 days, with prices starting at around $3,000 (2,265 euros) for the shorter trip, plus flights and visas.

The group travels in an unmarked air-conditioned van with Geoff Hann, Hinterland’s owner who has himself been making trips to Iraq since the 1970s, an Iraqi policeman for security, and a small team of drivers and guides.

They mostly try not to be noticed, do not announce where they are staying or headed, and generally have low-profile security.

They travel from Iraq’s north, where they take in the ancient cities of Nimrud and Hatra, down through Baghdad to Babylon and on to the port city of Basra, before returning to the capital.

While in Iraq, Hinterland customers stay at hotels, though the quality of the establishments varies enormously. None of the tourists who spoke to AFP expressed any complaints about accommodation.

Hann’s tour operator is one of the few that has approval from the government to organise trips. Individual tourists often struggle to obtain visas to the Arab-dominated parts of the country.

Much of Iraq’s security-focused infrastructure is ill-prepared for Western tourists.

While moving through Baghdad, for example, Hann’s group was stopped at a checkpoint outside a cemetery, with federal policemen demanding authorisation papers, typically only required of journalists, from the capital’s security command centre for the tourists’ cameras.

For “most of our tours under the Saddam Hussein dictatorship, we were restricted with minders”, Hann said.

More recently, “it’s been difficult here because of the security situation. We’ve had to have a different sort of minder”, he said, referring to the policeman escorting the group.

“That’s still there, it hasn’t gone away, because the security position for everybody here is difficult.”

Officials admit that while they hope to promote tourism, they also lack the funds for advertising campaigns, since much is budgeted for physical reconstruction after decades of war, and resources are also lost to widespread corruption and incompetence.

Visas, meanwhile, are the domain of security officials, who are loathe to reform a complex system that prioritises entry permits for pilgrims over other tourists.

But that is all almost academic when compared to Iraq’s main problem — its reputation for poor security.

The country has been through decades of conflict, from the 1980-88 war with Iran to the bombings and shootings that continue to plague daily life.

“When Iraq is mentioned in Europe, the first things that people think of are terrorism and violence,” Baha al-Mayahi, a senior adviser to the tourism ministry, told AFP.

“We need to put in place major efforts in order to change this, and to tell people that Iraq is not terrorism and killing, that Iraq is history and civilisation.”

Maya said Iraq averages around two million tourists annually, but that with some basic improvements that figure could increase to six million.

By contrast, Hong Kong, with a population less than a quarter the size of Iraq’s, brought in more than 48 million tourists last year, according to its official data.

“I think tourists should come more often. There is violence here of course, but you can be killed anywhere in the world,” Ali told AFP.

“Baghdad is not how we see it on TV. Tourists should come here, see this city, and I am sure they will come back again,” the 21-year-old added.

But the violence if anything appears to be worsening, with a surge in attacks and car bombings in recent months hitting much of the country. Upwards of 2,000 people have been killed since April — a level not seen since 2008.

For now, Hinterland is planning trips from September onwards after Iraq’s boiling summer concludes, but Mayahi admitted that security problems could scupper plans to promote tourism.

“If security worsens, tourism will decrease,” he said.

Despite the difficulties, few on the Hinterland tour expressed reservations about their trip.

“For a long time I’ve really wanted to come here,” said Greg Lessenger, a 32-year-old from Washington state in the United States.

“There was no possible way for me to go travelling (to Iraq) on my own. But then I found out about this, and I thought, maybe I have got a chance, and I took advantage of it.

“If you’re a real traveller, you have got to see some of these places.”

Irans Ministry of Intelligence and Security: Part One

Democracy in Iran Is Within Reach; If We Support the Resistance