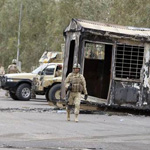 AP: An Iranian dissident group whose camp in Iraq was the scene of a disputed outbreak of violence last week claimed Tuesday that Iraqi authorities plan to hand over seven allegedly detained members to Iran. Baghdad denies having any such plans.
The Associated Press

BAGHDAD (AP) — An Iranian dissident group whose camp in Iraq was the scene of a disputed outbreak of violence last week claimed Tuesday that Iraqi authorities plan to hand over seven allegedly detained members to Iran. Baghdad denies having any such plans.

The latest dispute comes as Iraqi officials prepare to relocate the remaining residents of Camp Ashraf, about 95 kilometers (60 miles) northeast of the Iraqi capital. The compound has long been a source of irritation to the Iraqi authorities, who want it closed and its current and former residents moved out of the country altogether.

A total of 52 members of the Mujahedeen-e-Khalq were killed in a shooting at the Saddam Hussein-era compound on Sept. 1. The group, which opposes Iran’s clerical regime and was labeled a terrorist organization by the U.S. until last year, blamed Iraqi security forces for the killings. Iraqi officials have said an internal dispute erupted inside the camp.

A team from the United Nations mission to Iraq visited the camp after the killings and confirmed the number of fatalities, but it has not released further findings into what happened or ascribed blame for the deaths.

About 100 MEK members had been living at the camp before the killings. The U.N. refugee agency says 42 remain.

A spokesman for the MEK’s parent organization, the Paris-based National Council of Resistance of Iran, alleged that the seven people he said were “taken hostage” at the time of the killings are being held by Iraqi forces near Baghdad airport and will be transferred to Iran in the coming days. MEK members fear they will be persecuted if returned to the Islamic Republic.

“The government of Iraq has made no announcement about arresting these individuals and wants to return them to Iran surreptitiously at the first convenient opportunity without making any noise and raising attention,” Shahin Gobadi charged.

He said he knew this via sources within Iran’s “clerical regime,” but he did not identify them, expressing concerns about security. He said he did not know why those seven were abducted while dozens were killed and others survived.

Ali al-Moussawi, the spokesman for Iraqi Prime Minister Nouri al-Maliki, said he had no information about any missing residents. He denied there are any plans by Iraq to forcibly send former Camp Ashraf residents to Iran, and he pressed for help in resettling them safely abroad.

“These new allegations are baseless. The Iraqi government calls on all countries to accept them,” he said.

Maj. Gen. Jamil al-Shimmari, the police chief of Diyala province, where the camp is located, said no Ashraf residents have been transferred out since the shooting.

The U.N. on Saturday said Iraqi authorities plan to relocate the surviving Camp Ashraf residents to a former U.S. military base near Baghdad airport where more than 2,800 former camp residents are staying. That facility, known as Camp Liberty, is meant to be a temporary way station while the U.N. works to resettle the exiles abroad.

The move would likely mark the end of the MEK’s presence at Camp Ashraf, which the group has been extremely reluctant to leave.

The MEK carried out a series of bombings and assassinations inside Iran in the 1980s and fought alongside Iraqi forces in the 1980-88 Iran-Iraq war. Saddam granted several thousands of its members sanctuary inside Iraq, and they turned Camp Ashraf into a self-contained, isolated community.

The MEK’s continued presence inside Iraq long has irritated Iraq’s postwar leadership, which has worked to bolster ties with neighboring Shiite powerhouse Iran. The government is highly suspicious of those linked to the former regime.

The group says it renounced violence in 2001. Camp Ashraf residents were disarmed by U.S. troops after the invasion.

Efforts to relocate the exiles abroad have moved slowly. The U.N. has struggled to find countries to accept them, and officials have cited a lack of cooperation by some of the exiles. They do not want to return to Iran because they fear persecution there.

A total of 198 former residents of the two camps have been resettled abroad so far, most to Albania.

Reuters: Iran will not be allowed to have nuclear...

Reuters: Fourteen people were killed and 15 injured in...