AFP: Iraq’s new ambassador to the United States Wednesday repeatedly dodged questions about a mass killing at an Iraqi camp hosting Iranian exiles during his first online Twitter chat since taking up his post in July. 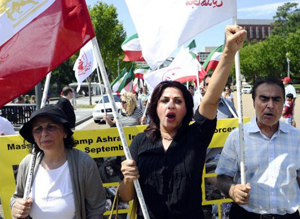 WASHINGTON (AFP) — Iraq’s new ambassador to the United States Wednesday repeatedly dodged questions about a mass killing at an Iraqi camp hosting Iranian exiles during his first online Twitter chat since taking up his post in July.

Lukman Faily was bombarded with questions about the whereabouts of seven people now missing from the camp, as well as who was behind the September 1 attack which allegedly left 52 dead.

“We await Prime Minister’s special committee results to be released once full investigation completed #AskIraq,” was his only in reply to a flood of inquiries about the attack.

Iraqi authorities blame in-fighting within the People’s Mujahedeen Organization of Iran for the deaths, and they insist no soldiers entered Camp Ashraf in Diyala province.

But those accounts are sharply contested by the PMOI, which charges that Iraqi forces entered the camp, killed 52 of its members and set fire to the group’s property and goods.

Baghdad has opened a probe into the events surrounding the deaths in the camp.

The UN and Western governments have condemned the bloodshed, but have been careful not to assign blame.

Those left in Camp Ashraf have now been moved to Camp Liberty, a former US military base on the outskirts of Baghdad, which houses some 3,000 members of the group also known as the Mujahedeen-e-Khalq (MEK).

The Iranian opposition group fears some seven Iranian exiles arrested at the camp are now on the verge of being extradited back to Iran.

Others alleged Baghdad was preventing the construction of safety walls around the camp to protect residents, after several attacks this year.

Faily steered clear of answering any other questions about the attack during the hour-long Twitter conversation in which he was also asked about his views on Syria and Iraq’s relationship with the United States.

Iraq’s “most immediate challenge rebuiliding govt institutions, security. We are determined to provde safe env, protect citizens,” he tweeted in a response with some spelling mistakes to a question about what the Iraqi government is doing to improve security.

“Sectarian,extremism needs to be denounced.Clearer strategy towards stability needs to be embraced by all political parties,” Faily added.

Asked why Iraq still needed help from the US, he replied that with “oil revenues at record high, we can afford to pay military needs; to stabilize borders we need int’l cooperation.”

On Syria and revelations about the use of chemical weapons, the Iraqi envoy said “we deplore use of CW and are pleased that negotiated mechanism put in place to remove WMD; more talks need to happen.”

Faily also said Iraq “opposes funneling of weapons to all sides” in the Syria conflict, but he did not answer a question on whether it was searching Iranian overflights, which Washington has accused of ferrying arms to the regime of Syrian President Basar al-Assad.

Asked, given Iraq’s experiences, what should be done about Syria, he replied: “The protection of citizens is paramount; longview of interest of Syrian people needs to be seriously considered.”

AP: Iranian officials have made no secret about their...