The Age: Local Iranian migrants have joined a global hunger strike to protest the alleged murders of an Iranian dissident group at the controversial Camp Ashraf, Iraq, and are calling on Australia to accept survivors, who have been classified by the UN as genuine refugees.
The Age 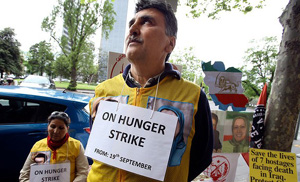 Local Iranian migrants have joined a global hunger strike to protest the alleged murders of an Iranian dissident group at the controversial Camp Ashraf, Iraq, and are calling on Australia to accept survivors, who have been classified by the UN as genuine refugees.

Two men, Jihangir Hosseini and Mohammad Sodeghpor, having already refused food for more than a month, are protesting outside the Department of Immigration and Citizenship on Lonsdale Street in Melbourne’s CBD.

Mr Hosseini has been on a hunger strike for 37 days, and has been surviving only on liquids. An advocate for human rights, freedom and democracy, Mr Hosseini says he joined the hunger strike on September 19 to “stand up for justice, quality of life and a free society” in Iran.

“Australia promised to protect my people, and I don’t understand how it and other authorities in the world would ignore their promises and not care about human life and their agreement to save it,” he says.
Advertisement

The protesters, and organisations such as the Victorian Trades Hall Council and the Construction, Forestry, Mining and Energy Union (CFMEU) are against the alleged killing by Mujahideen-e-Khalq (MEK), a group opposed to Iran’s clerical regime.

The protesters and unions are calling on Australia, the US and Europe to put pressure on the Iraqi government to free six women and one man, who they believe have been taken hostage.

“We are hungry; that is normal. But when you see young people being handcuffed or shot in the head, and when six women and one man are taken hostage, we gain strength,” he says.

Mr Sodeghpor says he will continue striking until the seven people are released.

“We are struggling to get them out as soon as possible, because if they are deported back to Iran, they will face torture and execution,” he says.

CFMEU spokesman, Gareth Stephenson, says the union is supporting the strikers “because we feel that what has happened to these people historically, and the discrimination they are experiencing now, is terrible”.

“The idea of the hunger strike is to attract world attention and to try and get as much international support for these people as possible,” he said.

In Brief: Total to continue activities in Iran